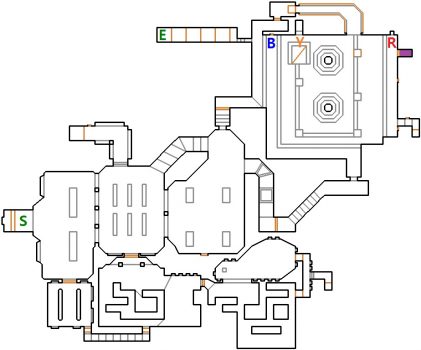 From the Start take out the Gunners and the enemies on the higher level if you wish. Open the door to the computer room to the south and take out the Imps. Inside you’ll find a Chainsaw.

Go through the door in the south east corner and head up the stairs to a dark room. Watch out for the Hell Knights hiding in the corridors in this room. One of them is guarding Blue Armor. 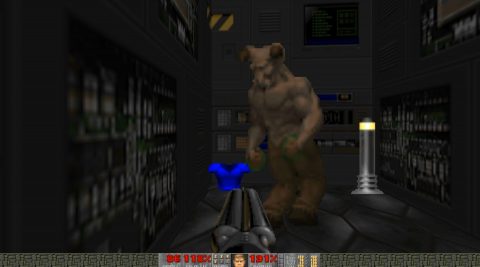 Take out the Mancubus and then head through the door to the east. Clear out the Gunners, including the Chaingunners up in the window on the north side.

Take the lift up in the north east corner of the room. In the next passage there’s a yellow door to the east but you’ll come back to it later. For now take the lift up on the north side of the passage and take out the Revenants. In this room you’ll find the Rocket Launcher and a few Rockets. 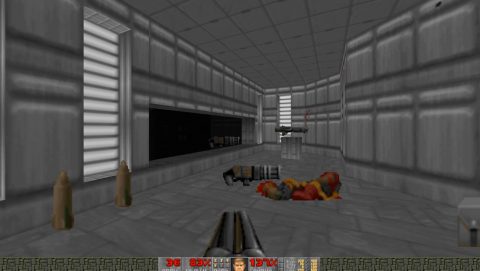 Take the lifts back down to the previous room and head to the room to the west. This time take the door to the north. You may have already cleared out the enemies here from the Starting room.

Head up the stairs to the next room and clear out the enemies. Take the door to the east and follow the passage around to a walkway around a large chamber with two giant pistons. Follow the walkway around to the Blue Key.

Make your way back along the passage to the previous room and then open the Blue Door to the north up the short flight of stairs. This passage leads out to a higher walkway around the large chamber.

Follow the walkway around, go through the door, pick up the Radiation Suit and take the lift down to a lower corridor. Follow this around to a thin walkway inside the large chamber. Take out the Cacodemon and then make your way around to the Yellow Key. 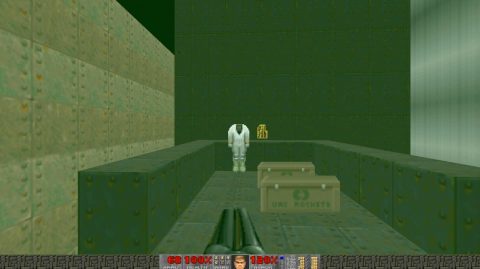 When you pick up the yellow key Cacodemons will spawn in. If you need health drop down into the lava for a few large Health Packs. There’s a Switch on the eastern side of the chamber that you can use to lower part of the walkway so you can get back up.

Make your way back through the Blue Door and hit the Yellow Switch on the other side of the room. Head down the stairs and make your way to the south eastern side of the map to the short passage with the Yellow Door. It should now be open.

Go through and step into the teleporter. You’ll be teleported to the south eastern side of the large chamber. Hit the Switch and take the lift up but watch out for the Imps on the walkway.

Grab the Red Key and then hit the Switch in the middle of the walkway if you want to see the large pistons moving. Open the panel on the wall between the Switch and the Red Key for the only Secret for this level. Inside you’ll find a Soul Sphere.

Make your way back to the room with the Blue Door and head down the steps. The Red Door should now be open. 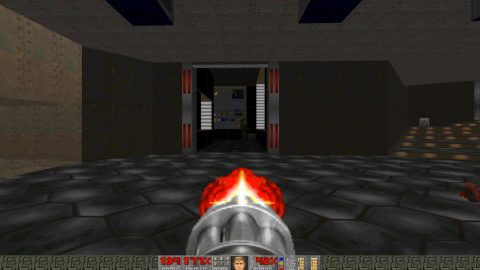 Press the Switch inside the passage and watch out for the Arch Vile that’s lowered down. Once it’s dealt with step onto the teleporter to end the level.