This is a fairly challenging area for an early level. Make your way to the right and use boost jumps to grab the few Cipher Coins along the way.

Break the blocks to drop down and then break the walls so you can head across to the right for the first checkpoint. The ladder in the ceiling takes you to a room with a few extra gems.

When you head to the right you’ll face a giant skeleton. Take him out and then jump up to the ladder. Break the wall to the right with the Cipher Coin in it. If you’re very quick you can boost jump over him before he wakes up. 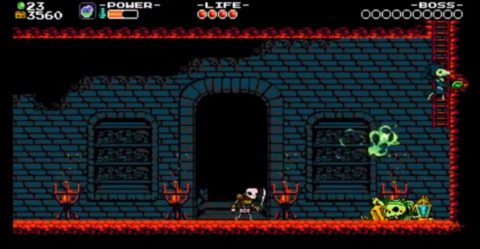 Take out the frogs and skeletons and drop down to the right. Make your way past the skeletons to the left for a chest with the Phase Locket. Once again you can’t use this item but you can trade it with Chester later.

Take the ladder down, drop down and boost jump to get the Cipher Coin as you make your way to the next platform. Jump across to the platform with the skeleton and shoot the helmet off the smaller platform. 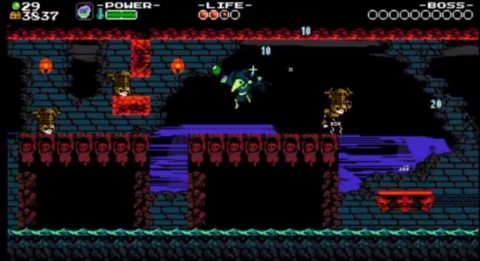 The two helmets will drop the platform down to the water. Jump onto it as it’s coming back up and then jump boost across to the ladder on the left.

Climb up the ladder and break the wall to the right with the skull symbol on it. You’ll wake up a giant skeleton but there’s also two Cipher Coins inside. Jump up to the left and use the cannon to get back up.

Climb up the ladder to the room with frogs. Jump up to the Cipher Coin and then make your way to the right.

The next area is difficult because it’s mostly dark and there are ghosts that can only be stunned for a few seconds. Keep an eye out for a Cipher Coin along the way and continue until you reach the second checkpoint.

Kill the skeletons and break the wall to the right. Climb down the ladder and boost across to the Cipher Coin. Climb up the ladder for a chest with gems and then head back up again. 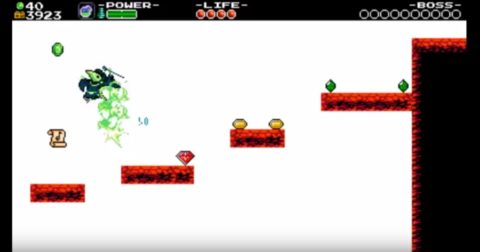 Make your way to the right across the platforms that lower when you stand on them and pick up the Cipher Coins along the way. Head up the ladder and take the exit to the top right.

Jump on the platform to the right and knock the helmet across to the left platform. Stand on it to make it lower. Take out the frog, break the block below and drop down.

Make your way to the left first to find the chest with Chester. He’ll trade the Phase Locket for the Leech Liquid Arcana. Head to the right for the third checkpoint.

Knock the helmet off from the ledge to the right to the moving platform below. Stand on it to lower it enough so you can get across to the chest where you’ll find Music Sheet #9. 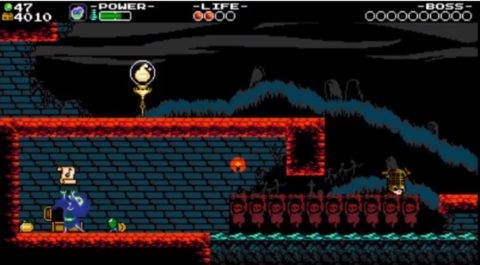 Head to the right and when you see the skeleton with a helmet on the ledge jump boost over him to the next screen. Drop down for a few gems and a Cipher Coin. 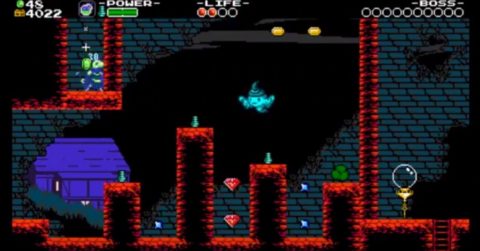 Head back and knock the skeleton onto the platform. Drop down so you can get across to the right. Drop down between the center pillars and you’ll fall down to the room below. There’s a secret chest with gems if you break the wall to the left. Kill the giant skeleton and head up the ladder to the fourth checkpoint.

Make your way across another difficult dark area, picking up a couple of Cipher Coins along the way. At the end you’ll find the fifth and final checkpoint. Break the small ledge to the left for food before facing the boss. 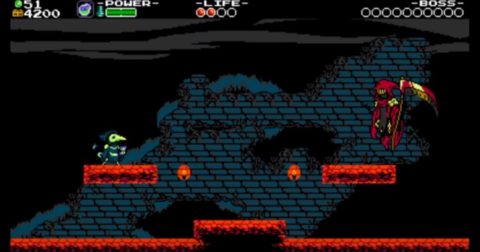 The Specter Knight is by far the most difficult boss so far. He flies across the room and often teleports to the other side or one of the lower corners.

I find it easier to use the bombs that lob as I’m usually trying to hit him from below. Use the Big Boom spell to do extra damage. After a while the screen will go dark and the Specter Knight will spawn in skeletons. Once again use the Big Boom if you want to clear some of them out. If you’re worried about taking damage use the Leech Liquid to recover some of your health.

When the Specter Knight has been defeated you’ll end up back in the Potionarium with Mona. Give her your Cipher Coins for more research if you have enough.