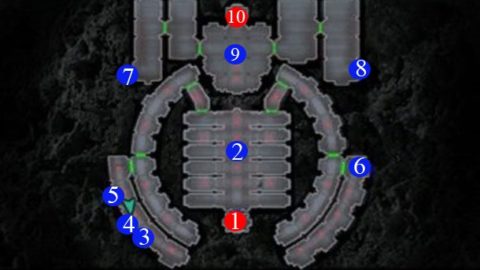 2) Elite Sith Assassin – There will be many groups of Sith that you’ll need to defeat along the way, no matter what path you take. These will include Sith Lords, Dark Jedi and Sith Assassins.

3) Exit to Trayus Crescent – Take either of these three doors to the Trayus Crescent. This is the western path that eventually leads around to the entrance at #7 where you can fight Darth Sion at #9.

6) Exit to Trayus Proving Grounds – This is the eastern path that eventually leads around to the entrance at #8 where you can fight Darth Sion at #9.

9) Darth Sion – During the battle with Darth Sion you’ll have three chances to talk to him. Each time try to convince him that it’s not worthwhile doing battle and the Kreia is just using him. If you’re successful you’ll successively reduce his Will Saves, Constitution and Wisdom modifiers, making the battle easier and easier. Eventually Darth Sion will fall for the last time and you can continue to the Trayus Core.

10) Exit to Trayus Core – If you went to the Trayus Crescent you may want to enter Proving Grounds to use a Workbench for one last time.  The final battle lies just ahead.

Head into the Proving Grounds first if you want to save your friends. The path is fairly linear. Find the prison cells and use the Prison Console to open the cell doors and let your team mates escape. You can of course choose to kill them all if you are truly nasty!

Continue through the proving grounds and take the exit back to the Trayus Academy. You’ll face plenty of Sith along the way so make sure you’re geared up for the fight.

If you want to explore the entire area then once you have defeated Darth Sion in the Academy (#9) then make your way to the exit (#7) to explore the other map. Once again it’s quite linear so you shouldn’t get lost but there are some tough battles and plenty of experience points on offer. Once you are done take the exit to the Trayus Core (#10).

As you enter the Core Kreia reveals herself as Darth Traya. Use all the buffs and best equipment you can because this is the last battle. For the first round you’ll battle with Kreia. She has a single lightsaber so you should be able to deal with her pretty easily just by healing up a few times.

Congratulations on completing Knights of the Old Republic 2!