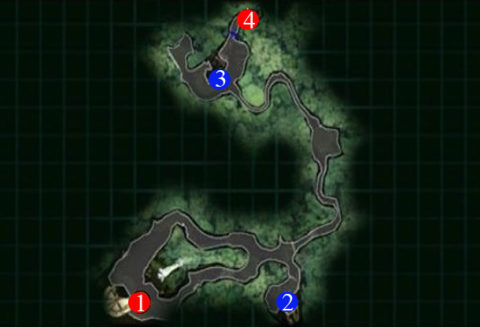 After crash landing on Dxun, the moon of Onderon, Atton will stay behind to fix the Ebon Hawk. The Jungle Landing area is not large but you will meet a few new animals here, the Cannoks, Maalraas and the Boma Beasts. None of them are particularly difficult.

2) Crash Site – There’s a crashed ship here in the jungle. You can repair the console and get access to the cameras on the three strange droids for a little experience.

3) Bounty Hunters – It seems these bounty hunters just won’t leave you alone. There’s no way out of this fight. Once they’re dead search the bodies and then head to #4 to go deeper into the jungle.

4) Exit to the Jungle 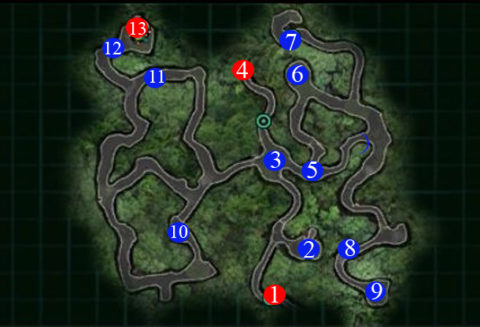 2) Cache – There’s no way through this door except with Thorium Charges and you’ll need to visit Korriban to get them. Inside is a room full of conatiners filled with items so it may be worthwhile coming back to pick them up.

3) Mandalorian Camp – When you first enter the Jungle you’ll be confronted by the Mandalorians here. You can either fight them or agree to meet their leader. Even if you fight you’ll lose and be taken to their leader anyway so you might as well go along with it. 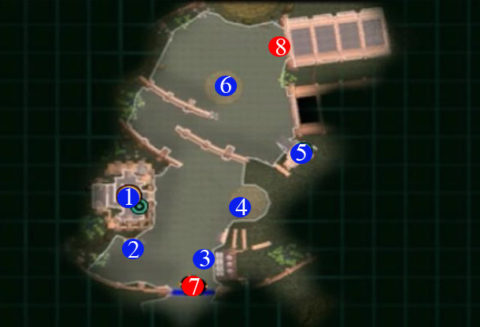 1) Mandalore – You’ll be taken to the Mandalorian leader and find out he’s not such a bad guy after all. He can take you to Onderon in his shuttle but will do so only once you gain his respect by completing quests.

2) Kex the Quartermaster – Speak with Kex to look at what he has for sale. You’ll also face him in the Battle Circle as an optional quest.

Zuka is trying to make repairs around the ruins. There are three things you need to do to help him out. The first is to fix the broken wires that you’ll find a few meters away to the left. Next repair the Telemetry Computer at #8 with some programming spikes. Lastly, find the three pieces of the phase pulse converter in the Jungle.

4) Xarga – Speak with him to find out about a missing Mandalorian called Kumas. You’ll find him in the Jungle at #7.

5) Telemetry Computer – Make repairs here with Computer Skill and spikes to help with the Zuka quest.

6) Mandalorian Battle Circle – This is an optional quest to gain some prestige by winning one-on-one battles with the Mandalorians. You’ll be able to have a few battles now and you can finish them off once you’ve proven yourself by completing the quests in the Jungle.

8) Shuttle to Onderon – Once you have enough prestige with Mandalore he’ll take you to Onderon.

5) Phase Piece 1 – The Cannoks have eaten pieces of the phase pulse converter. You’ll find the first piece after killing and searching a Cannok here.

6) Boma Beast – When you approach the beast Kreia will teach you a new force power, Beast Trick. It will passify animals for a short time, allowing you to either run away or get off a few cheap shots to kill it.

7) Kumas – This Mandalorian was thought to have died in the jungle but he’s been hiding up here on a ledge to escape the beasts in the jungle. Kill the Boma Beasts behind the ledge and speak with him again. For Dark Side points either leave him there or use the detonator to blow him up.

8) Phase Piece 2 – You’ll find the second piece of the phase pulse converter in a Cannok here.

9) Zakkeg – This is the renowned beast that the Mandalorians are fearful of. This fight will be fairly easy if you have completed some of the other planets. If this is your first planet use a Melee Shield to make the fight easier.

10) Kelborn – Meet Kelborn here and he’ll ask you to help him scout out this area of the jungle. Agree and do a loop around the southern area of the jungle. You’ll come across two groups of military scouts. Take them out and then come back to Kelborn to finish the quest.

11) Phase Piece 3 – Kill the Cannok here to find the third piece of the phase pulse converter.

12) Detonator – Use the detonator to blow open the door to the Mandalorian cache.

13) Mandalorian Cache – This room is filled with mines, droids and containers. The droid foreman in the center has a datapad that you can read. You may be able to program the droids using the foreman. Otherwise bash one of the droids to wake them up. Use force powers and ion weapons to deal with all of the droids. Check all the containers for items and loot.

Head back to the Mandalorian Ruins and complete any remaining quests. Speak with Mandalore and he’ll agree to immediately take you to Onderon. As you leave the camp will be attacked by Assassins. Help the Mandalorians kill all the Assassins and then you’ll take the trip to Onderon.

Back: Knights of the Old Republic 2