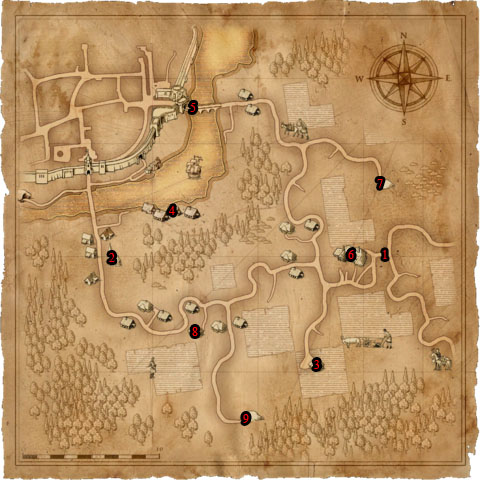 This quest is initiated when you first speak to Shani at the Eastern Gates (#1) when you arrive. In order to complete this quest you’ll need to gain the confidence of a number of the townsfolk by completing a quest for each of them. You’ll need the Eternal Fire Ring from the Reverend (#2) to complete the quests with the other people. A ring can also by found by trading a Beggar in the small village to the south of the Reverend’s house for a White Gull potion.

The Revered (#2) – The Rev will ask you to light the five Eternal Fire Shrines in an attempt to stop the Barghests. You can see this quest in Of Monsters and Men.

Odo (#3) – Visit Odo in his house and he’ll tell you about a little gardening problem. See the Secret Garden quest for more details.

Haren Brogg (#4) – This quest is from Strangers in the Night. Haren wants you to protect his cargo from Drowners that appear during the night.

Mikul (#5) – Mikul can be found at either the eastern gate or the southern gate leading into Visima, depending on which one you explore first. He will give you the Crypt Key and wants you to kill all of the Ghouls in the Crypt (#7). More information is found in the Buried Memories quest.

Before you complete these four quests make sure you have completed all of the side quests as things will change in the Outskirts of Vizima once these quests are completed. Abigail will go into hiding and Alvin will be taken by the Reverend. The Shopkeepers will also go into hiding.

Once you have completed all of the above quests visit the Reverend (#2) again. He’ll tell you that the Salamdra have a hideout (#8) in one of the houses of the village. He also tells you that Olaf has the Key at the Inn (#6)

Go to the Inn and you’ll find Shani in a fight with some goons. Kill them all and search Olaf’s body for the Key to the hideout.

Go to the hideout (#8), take out the guards out the front and enter for a tough fight. Once the room is clear look at the trap door. The first time you click on it you’ll see a cut-scene of Geralt investigating the goods which apparently have come from Haren. Click on the trap door again to descend into the caves.

Inside the cave you’ll find more thugs and a Salamandra boss. He’ll chat with you before starting the fight. You’ll discover a few ugly facts about the Reverend and Berengar. After the battle search the entire cave for The Book of the Tawny Owl, Diamond Dust and a Blue Meteorite which can be used to forge new swords.

After you’re done searching the cavern speak with Alvin and he’ll point out a part of the cave that seems weaker then the rest. Use the Aard sign on the wall to break through. Abigail is waiting on the other side and the children will make their escape.

You can spend some time here with Abigail and have sex with her before confronting the angry mob outside which continues in the Of Monsters and Men quest.

Next: Of Monsters and Men
Back: Chapter 1