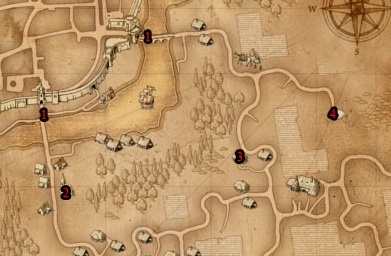 To begin this quest visit Mikul (#1) at either the eastern or souther gate into Vizima. He’ll be at the first gate you visit. This quest is necessary to complete The Salamader’s Tail quest.

Mikul will refuse to speak with you unless you can prove that you can be trusted. Show him the Eternal Fire Signet Ring that you can get from the Reverend (#2) or bribe him for 15 orens.

Mikul isn’t the smartest cookie in the jar and wants you to kill some “dead’uns” which is his name for Ghouls. He also give you the Crypt Key so that you can enter the Crypt (#4).

The Crypt is very dark so before going in either use a Cat potion or take a Torch with you. Torches can’t be equipped while fighting with a Sword so it’s better to use a Cat potion. Necrophage Oil will also help to kill the Ghouls.

Inside the Crypt you’ll find a dead girl with a Glass Vial in her hand. It appears she’s poisoned herself. Later on you’ll discover that the girl is Mikul’s girlfriend who poisoned herself because he had been abusing her. The poison was obtained from Abigail.

There are 6 Ghouls in total in the crypt. Try to draw them out one-by-one if you can. Use the Strong style to attack them and quaff a Swallow potion if you need to heal up.

There is a Circle of the Elements where you can learn the Igni sign for a powerful flame attack. Next to the Circle is a corpse. Search the corpse for a Dice Box that will trigger the A Game of Dice quest.

Leave the Crypt and make your way back to Mikul (#1). On the bridge you’ll be attacked by the Salamdra. If you fought the Frightener instead of going with Triss in the Prologue you’ll also have to face an Armored Hound. The Guards will help you defeat these enemies.

Speak with Mikul to complete this quest. He tells you they’ll be sending down guards to check out the Crypt. Now when you head back there the eastern part of the Crypt will be open for you to explore

Next: The Salamander’s Tail
Back: Chapter 1