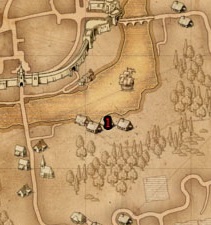 As you approach the small fishing village (#1) for the first time you’ll come across a dwarf being harassed by some thugs. You can chose to intervene and protect the dwarf or stay out of the situation.

The dwarf is none other than Zoltan Chivay, one of Geralt’s old friends. He’s a tough opponent and will kill all the thugs by himself even if you don’t help him out but you will lose some XP.

If you stand by and watch the fight you’ll receive nothing but this won’t hurt your friendship with Zoltan at all and you can still talk to him and place Dice Poker with him. If you help out with the fight you’ll gain an extra 2,000 XP.

Next: She’s No Early Bird
Back: Chapter 1