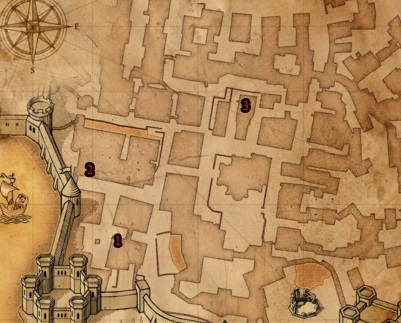 A Ghost Story is a side quest that’s given by a random thug when you enter house (#1). He wants you to kill the ghosts in a haunted house (#2) so that you can get the treasure.

When you make your way over to the haunted house (#2) you’ll find it’s a set up and the same thug who gave you the quest, along with a few others, will attack you. Once you take care of the thugs in Geralt’s usual manner you’ll find that had kidnapped a Half-Elf Woman.

The half-elf tells you that she’ll give you a reward if you meet her in the non-human district later (#3). She’s staying at the Dwarven Blacksmith’s house which can only be accessed by a small alley.

Make your way over to the house where she’s staying (#3) for some XP and a very special reward, a Sex Card.

Next: A Gravedigger’s Gratitude
Back: Chapter 2