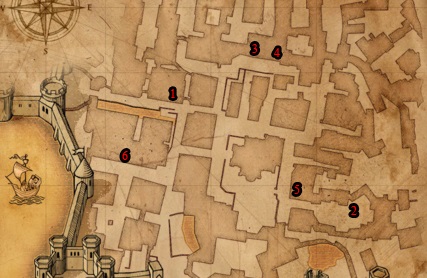 This quest is initiated the first time you speak with Raymond Maarloeve (#1). It will span most of Chapter 2 and involves speaking with the suspects multiple times in order to clear them of being involved with the Salamandra.

The list of suspects includes Vincent Meis (#2), Declan Leuvaarden (at the Dike), Golan Vilvaldi (#3), Kalkstein (#4), Thaler (#5) and Ramsmeat (#6). Proving the innocence of each of these characters can be found in the Suspects quest. Vizima Confidential also encompasses The Crown Witness quest and the Anatomy of a Crime quest.

During your investigations Raymond Maarloeve will try to lead you to think that Kalkstein or Ramsmeat are guilty. He may even convince you to try and kill Ramsmeat. You’ll need to speak to each of the suspects multiple times and go over some of the questions that you’ve already asked as they may reply differently the second time around. Keep persevering as this is a difficult quest to complete.

At some point during the second chapter, probably after the autopsy of the prisoner or once you enter the crypt and discover the dead body inside, you’ll figure out that Raymond is actually Azar Javed. Don’t confront him straight away or you’ll be killed. Instead go and see Kalkstein to figure out a plan to deal with him.

This quest ends once you battle Azar Javed in the Swamp Forest. You’ll be knocked unconscious and the quest and chapter will end.

Next: Anatomy of a Crime
Back: The Witcher Chapter 2