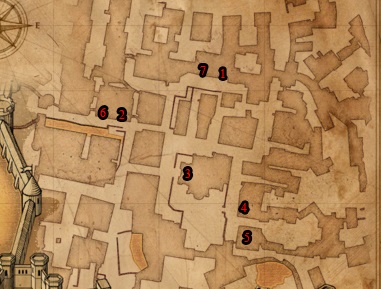 The Suspects quest will form the main part of Chapter 2. As you journey around Vizima you’ll discover a number of potential suspects including Kalkstein, Leuvaarden, Ramsmeat, Thaler, Vincent Meis and Vivaldi. In many cases you’ll need to prove their innocence before they’ll continue working with you. You should speak with all of them and go back over the dialogue options even if they are greyed out as you’ll need to repeat some of the dialogues to get more information.

During The Crown Witness quest a prisoner will mention the name “Kalkstein” before dying. Could Kalkstein be behind the Salamandra gang? Speak with Kalkstein (#1) and he’ll let you know that he did indeed know the witness who helped him with his experiments although he denies being a part of Salamandra.

Thaler also mentions that Kalkstein was behind the hiring of Berengar. The only way you can prove his innocence is after finding the body in the Crypt and completing the A Gravedigger’s Gratitude and Anatomy of a Crime quests.

Declan Leuvaarden is a merchant but has some mysterious business connections. He’s certainly very wealthy and has been accused of paying off the guards and paying for the release of the Professor.

After The Crown Witness Quest Raymond Maarloeve (#2) will leave town and leave you his notes. They mention Leuvaarden as one of the main suspects. You can clear Leuvaarden by selling him 3 Salamander Brooches and discovering that he works for a secret organization trying to rid Vizima of the Salamandra gang or by completing the Anatomy of a Crime quest which involves doing an autopsy on the prisoner.

Ramsmeat is a thug and one of the main suspects. He’s also not too talkative so if you say the wrong thing he’ll refuse to speak with you further. Ramsmeat’s men were also seen at the Hospital (#3) trying to bring back the body of the prisoner. Ramsmeat is actually innocent but it’s difficult to prove and Raymond will try to convince you to kill Ramsmeat. The only way to prove his innocence is by completing the Anatomy of a Crime quest.

Thaler (#4) is a fence and the first time you speak with him you’ll discover that he has Berengar’s equipment. He claims he bought the items but you’re not so sure. Raymond will also list him as a suspect eventually.

There are a couple of ways to prove Thaler’s innocence. The first is to wait outside his house at night. You’ll have an encounter with a “Mysterious Man” who tells you that Thaler works with the well-to-do people as well as the disreputable. After speaking with Jethro (#5) and giving him some Fisstech you’ll also discover that Thaler works with the City Guards. Putting it all together you’ll figure out the Thaler is conniving with all kinds of people but that he’s not working for the Salamadra.

The other way to prove his innocence is after completing the Old Friend of Mine quest. Shani will inform you that Thaler is the Chief of Vizima’s Secret Police. Once Thaler has been cleared he will remove the Gravedigger’s debt and you’ll be able to access the Cemetery.

Vincent Meis becomes a suspect after Geralt is attacked in the Sewers. Vincent was one of the few people who knew Geralt was there. If you speak carefully with Vincent and accept his explanations you will conclude that Vincent is innocent.

The other way to prove Vincent’s innocence is by speaking with Coleman at the Hairy Bear Inn and accepting The Rat quest from him. This quest only comes up after you’ve spoken with Vincent about the Salamandra. Once you clear the Haunted House (#6) for Coleman and return to the inn you’ll find him missing. Head over to the Dike to find him and he’ll tell you that he’s been working for Vincent to dismantle the Salamadra gang.

Vivaldi is a wealthy dwarf bank owner and the money for the Professor’s release came from the Vivaldi bank. Could Vivaldi be bank rolling the Salamadra gang?

To clear Vivaldi you’ll need to speak with him and Zoltan Chivay, either at Vivaldi’s House (#7) or wandering around the Temple Quarter. They’ll tell you that Vivaldi no longer owns that bank and that it’s been taken over by humans.

Next: The Beast of the Sewers
Back: The Witcher Chapter 2