After the chat with Zip run to the left and use the HK with Sniper Mode to shoot out the vent. Crawl in and pick up the Large Medipack. Continue crawling forwards and half-way through the tunnel you’ll have another chat with Zip.

Continue crawling forwards to a t-intersection with laser trap. Crawl to the left but stay ducked down as the laser will fly past overhead. When the laser passes stand up and take a standing jump over the pit. Run to the end of the corridor.

The vent to the left can be shot open but for now crawl through the passage to the right. Drop down into a Storage Room. Search the shelves for HK Clips, a Small Medipack and a Hammer.

Climb back out the way you came. Shoot the vent and crawl through. In the corridor to the right there’s another laser trap. Drop down and duck to avoid the laser. Crawl to the left. When the laser passes stand up and run to the end of the corridor. 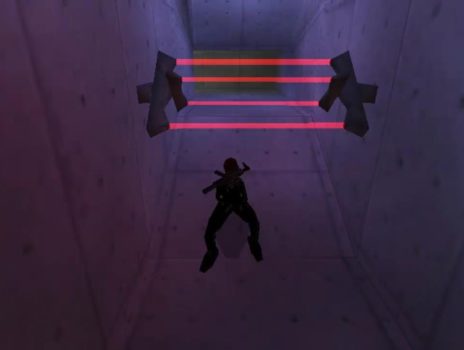 Duck down and go through the crawlway. As you crawl forwards a vent will open. Jump down for Golden Rose #1.

Jump over the pit to the other side while avoiding the laser. At the end of this duct is a Large Medipack if you haven’t picked it up already. Crawl through the duct to the right, back the way you came when you started the level.

As you turn the corner you’ll see there are now 2 laser traps in this corridor. It can be difficult to get past them both without taking any damage. Take a standing jump over the low laser, run forwards and duck down under the second laser. Crawl forwards and climb up the ladder on the left. 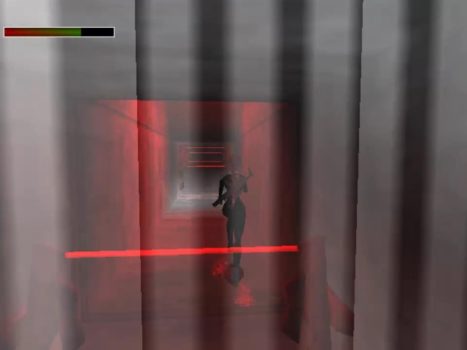 As you run forwards through the duct you’ll see a short cut-scene of the Iris. Continue forwards, pick up the HK Clips at the end and continue to the right for another cut-scene.

There are two ways to open the locked vent. You can do it without alerting the Soldier by using the Hammer or blow open the lock with your HK. If you blow it open the duct will break and you’ll need to fight the Soldier below.

I’ll assume you have the Hammer so use it to open the vent. Run around to the other side of the ladder and climb into the alcove for HK Clips. Drop back down and climb up the front of the ladder. Stop after a few rungs and move as far as you can to the right. When the laser passes by quickly climb the rest of the way to the top.

Shoot open the metal plating on the wall to the left and climb into the passage. Run to the left first for HK Clips, then turn around and run the other way. Stop when you’re a few tiles away from the opening. A Guard is below and he’ll activate a Machine Gun Turret if he spots you. Use your HK to snipe him from the passageway. 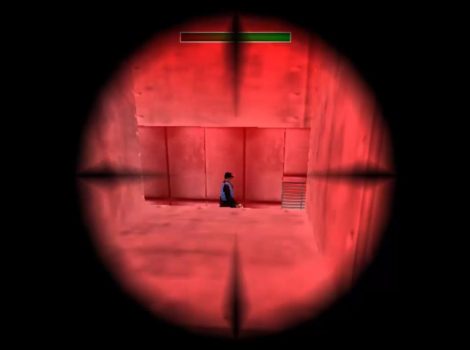 Drop down to the corridor and shoot open the vent just in front of the Cola Machine. Crawl through until you can stand up and then shoot the vent on the other side. Crawl out to the corridor and you’ll see a Guard sleeping by a desk. Slowly walk up behind him, kill him and take the High-Level Access Card. You can steal the card while he sleeps but you’ll just have to deal with him later anyway.

Use the High-Level Access Card on the slot in this room to open the Storeroom. This also deactivates the lasers in the hallway. Search the shelves for 2 Sets of HK Clips, and a Small Medipack. Leave the office and head down the corridor to the elevator. 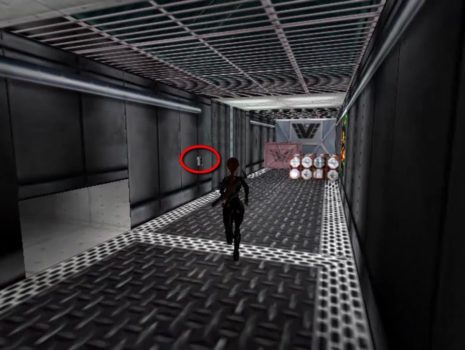 When the doors open you’ll see a cut-scene of 2 Guards standing around chatting. Step just outside the elevator and use the HK to snipe both of them before they can react. You can just see the tops of their heads over the crate to the right.

Run to the right and take out the next Guard down the ramp to the right. Turn around and run to the other end of the corridor, past the 2 crates. Use the High-Level Access Card on the slot on the wall to the left. Go through the triangular doorway.

You can ignore the workers in here as they won’t attack. Walk to the flat table and push the Button on the side of it to see a hologram of the Iris and to open a door at the other end of the corridor.

Head back out, run to the other side of the corridor and go down the ramp. Take a left through the door you just opened, run around the central structure and through the next door that opens automatically. This is the Suit Locker Room.

Run around to the right, past the Cola Machine and towards the door at the end of the hallway. Use the Access Code Disk on the computer to the left of it to open the vent.

SAVE your game and climb into the ducts. There will be a series of explosions in a shaft to your right, as well as a pole. The blasts will be in a sequence of 4 strong blasts followed by a few less powerful blasts. The strong blasts can set you on fire if you’re too close.

On the last strong blast run forwards and grab onto the Pole. Slide down until you’re in between the two vents in the wall in front of you and flip backwards. You should land in a duct. Turn around and pick up Golden Rose #2.

Wait for the fourth strong blast and then drop the rest of the way down the shaft. Quickly crawl through the crawlway. Keep going till you come out to a room with walkways. As you cross the walkway ahead you’ll have a chat with Zip.

After the talk continue forwards around the corner and take the first right into a Storeroom. Search the shelves for a Small Medipack and a Cloth.

Go back to the corridor and continue around to the right to another walkway. You’ll see a Soldier down below. Run down the stairs. Keep close to the walls to not alert the Soldier and use the High-Level Access Card on the slot by the second door.

Open the first cabinet on the right for Chloroform and a Large Medipack. Combine the Cloth with the Chloroform to make Chloroform Soaked Cloth. Open the next cabinet for a Small Medipack and another vial of Chloroform. Bugs will break out and attack.

Leave the Insect Room and walk up behind the Soldier and use the Chloroform Soaked Cloth to incapacitate him. Use the High-Level Access Card on the slot to the right to open the door and go through.

Run forwards and pick up the HK Clips from the floor. As you continue forwards a door will shut behind you and a Soldier will attack. Hop backwards a few times and then use the HK in sniper mode to shoot him in the face. He drops the Iris Lab Access Disk so make sure you pick it up before continuing down the corridor.

Use the Iris Lab Access Disk on the computer to the right to open the door and go through. There’s a Worker inside a glass room and a Guard patrolling outside. When the Guard turns around use your sniper to take him out. This may activate the Machine Gun Turret so run forwards and out the exit on the other side. 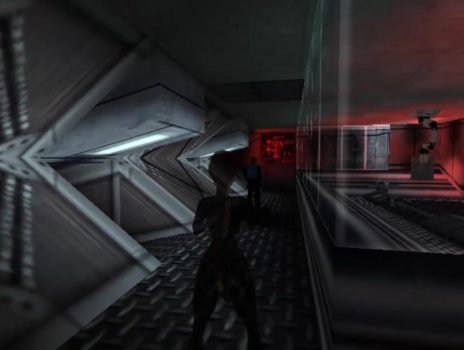 After the next cut-scene shoot the Worker in orange before getting too close to him. You need to do this to get access to the last secret. When you shoot him 2 Guards will come out of a door and attack from behind.

Run back around the glass room and enter through the door where the Guards came from. There’s a third Guard here you’ll need to take care of. Shoot him, run down the ramp, taking out a fourth Guard along the way.

Stop at the t-intersection for a laser trap. When it passes by to the right run to the left and pick up Golden Rose #3. Run to the other side of the corridor, ducking the laser along the way and go up the stairs to the top. Enter the Iris Room and either get ready for a timed run or a little cheat.

For the timed run pull the Switch by the door, run quickly down the stairs and through the open door underneath. Run up to the Iris and grab it.

For the easy option pull the Switch, take one side-step to the left, backflip, hop backwards, duck down and then crawl backwards. You’ll drop off the edge through the glass. 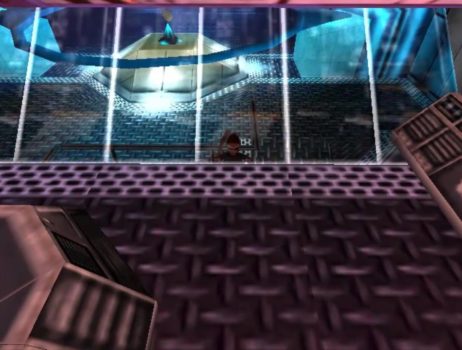 Run up to the Iris and grab it. Continue through the passage ahead to end the level.

Next: Escape with the Iris