At the beginning of this episode you start with your TMX Watch, 3 Small Medipacks and 1 Large Medipack. The hole to the right leads down to the valley floor but you’ll be going there soon anyway. Turn left and follow the path around the side of the cliff. Take a running jump across the chasm to land on the white speckled ledge on the other side. 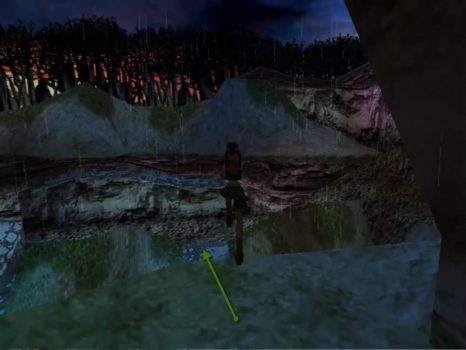 Jump up and grab onto the crevice in the cliff face in front of you and traverse across to the left. Continue all the way around the corner until you can drop down onto another white speckled ledge.

Turn to face the setting sun and take a standing jump to the sloped ledge. 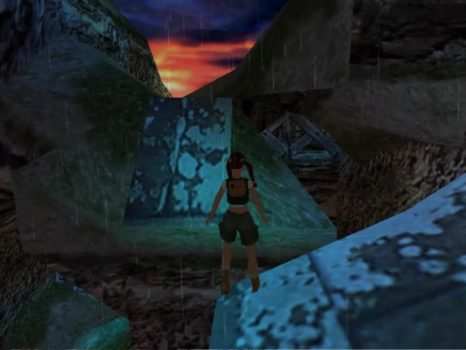 Grab onto the edge as you slide off and then drop down to avoid taking too much damage. Turn to the right. You’ll see a dark cave. Walk as close as you can to it and then take a standing jump with Action to make it across the gap. As you run inside you’ll be attacked by Bats. Duck down until they disperse and then pick up the Large Medipack and Golden Rose #1. 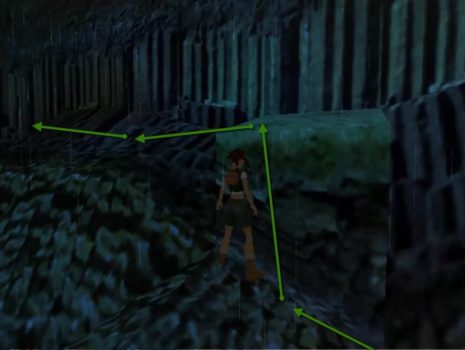 Drop down to the valley floor and then climb up the grass block again. This time climb into the passage ahead. Climb through the tunnel and make your way back to were you began the level.

Take a running jump to the white-speckled ledge, pull up to grab the crevice and traverse across to the other speckled ledge just like you did the first time.

Slide down the grass on the other side, turn right and climb onto the small grass block under the bridge. Jump up to grab the vines on the underside of the bridge and then monkey swing across to the other side.

Continue forwards and drop down into the dead end to the right for a Large Medipack. Climb out and slide down the passage on the other side. This takes you to the Gallows Tree. 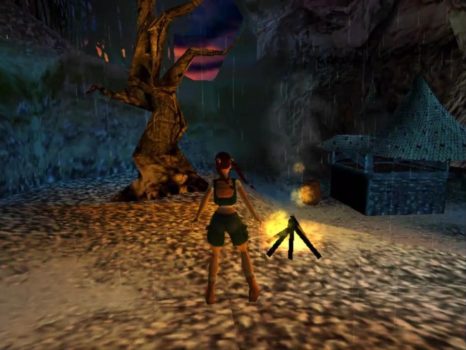 Be careful not to stray too close to the covered well. The barrel next to it contains a Changeling that will run out and chase Lara around for the rest of the level. It’s not too difficult to escape from if you keep moving but will make traversing around the level a little more difficult.

Turn back around the way you came and climb up onto the wall to the left of the entrance. Immediately backflip before you slide off to land on the flat block behind you where you’ll find Golden Rose #2.

Drop back down and enter the passage on the right of the Gallows Tree (when facing it from the entrance to this area). Ignore the crawlway, turn left and jump up to grab the slats on the roof. Monkey swing to the passage above and then duck down in a corner to avoid the Bats.

Continue along the passage and climb out at the end. You’re now overlooking the Gallows Tree area. From the very edge take a swan dive into the well below. Swim through the tunnel. Take a right at the first t-junction and right again at the next t-junction. Take a left at the next intersection and then pull up to arrive at the Mill Pond.

Climb out and walk to the end of the walkway. Turn left and take a running jump to the sloped ramp. Backflip across to the area on the other side of the building as you’re sliding down. 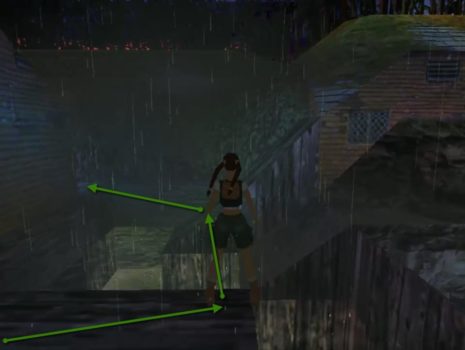 Crawl through the small tunnel to get into the building. Pick up the Large Medipack from the ground and search the drawers for a Rubber Tube. Either go back through the crawlway or dive into the water to get back to the Mill Pond.

Walk back out to the end of the walkway and jump across the wooden divider in the middle of the pond. Climb out the other side. Rats will start chasing you but if you keep moving they’ll disperse. Run through the passage and then through the crawlway back to the Gallows Tree.

Run past the entrance to the other side, making sure to stay away from the area around the Gallows Tree. Crawl into the small tunnel at the end on the left. Run to the left and under the overhanging ledge. It’s dark and misty inside but you’ll find a Pitchfork on the ground.

Walk back out and climb up onto the ledge. Use the Rubber Tube with the Pitchfork to make a “Catapult” which is really a Sling Shot and use it at the entrance to the Bell Tower. Lara will shoot the chain and the bells will ring. They’ll come crashing down and open the entrance. 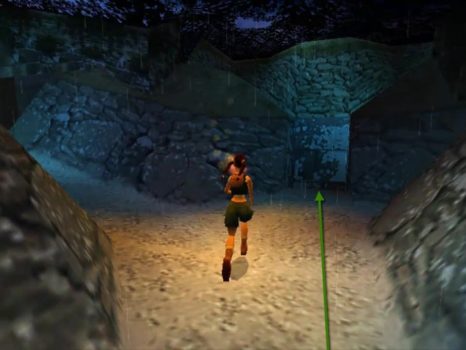 Throw your Torch down the hole and then climb down after it. Pick up the Torch and then sprint forwards over the breakaway tiles just past the ramp. There’s a spike pit under them. You can also just go up the ramp before the tiles and avoid the pit entirely.

Turn right up the ramp just past the pit. Bats will attack. Go to the end of the passage and run down the ramp. You’ll need to drop your Torch here while you go for the next secret. Walk past the spikes and crawl through the passage. On the other side you’ll find a Large Medipack and Golden Rose #3.

Crawl back out and walk past the spikes. Pick up your Torch and make your way back up the ramp. Run back to the spiked pit or breakaway tiles and take the passage to the right. Follow the passage to a room below the Gallows Tree. Use the Torch to set the roots of the tree on fire. Step back and then pick up the Heart that drops from the tree.

After the cut-scene head down the passage Father Patrick went down but only to pick up the Small Medipack on the floor. Once you have it, turn around and go through the other exit on the right side of the room. Go back past the tree root and continue down the ramp. Go around the spike trap and then climb up the ladder to the Crypt.

Take the path to the right and use the Heart in the small recess at the top of the hill. 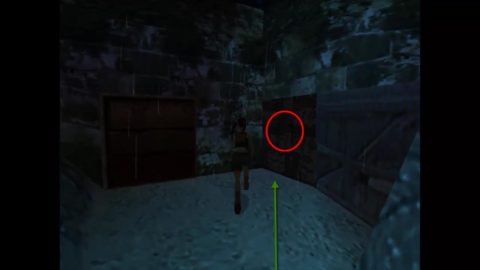 The door next to you will open and the Changelings will come out to attack. If you have the Clapper from the Bell Tower Lara will throw it at the Changelings and scare them away. She’ll then open a trapdoor.

Drop down and crawl through the passage. Climb up a few times and then run over a bridge. Pick up the Large Medipack along the way. Bats will attack but just keep running. Continue following the passage on the other side of the bridge to complete the level.