Bring it On: Loc Muinne 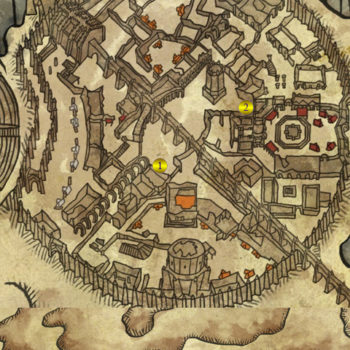 In the previous chapter during the arm wrestling tournaments you may have heard of a champion arm wrestler by the name Mighty Numa. This quest begins when you read the notice on the Noticeboard (1) or find Numa (2).

If you try to arm wrestle Numa he’ll beat you easily. There are two ways to defeat him. Either accuse him of cheating, in which case you can wrestle him again and this time he won’t take any potions or talk to his friend, Marcus, who sells Anabolic Steroids. Drink the Steroids and then arm wrestle Numa again.

Whatever path you take you’ll easily be able to defeat Numa. In fact it will be the easiest arm wrestle in the game. Numa bets up to 200 Orens but you won’t be able to challenge him again once you’ve defeated him. You’ll also receive the Diagram: Long, Robust Gauntlets.