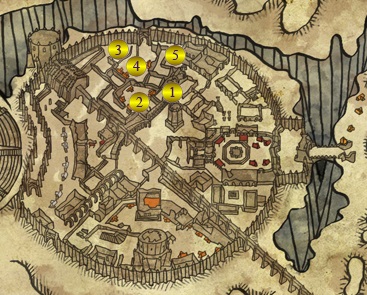 This quest starts when you find Philippa in the dungeons and decide to search for Triss rather than trying to save Saskia (Iorveth path) or Anais (Roche path).

You’ll notice Shilard (1) speaking with his guards and take him hostage. As you’re exploring the Nilfgaard quarters a Nilfgaard emissary, Renuald aep Metsen (2) will shoot Shilard. Defeat the emissary and the soldiers and then look for a way into the camp. You’ll need to go over the rooftops by climbing up a nearby ladder to the courtyard with the pond (3) where you’ll face more Nilfgaardians.

Head up and speak with Renuald (4) and he’ll claim that Triss conspired with the other sorceresses to kill the Kings. During the talk more Nilfgaardians will arrive and another fight will ensue. After the battle lood the body of Renuald for the Dungeon Key, a Letter and the Vicovaro armor.

Make your way into the dungeon and find Triss (5). She says that she was a member of the Sorceressses Lodge but had no influence over its decisions. After the conversation lead Triss out of the Nilfgaardian camp (1).

If you fail to rescue Triss and take one of the other quests instead Letho will save her and bring her to the final confrontation with Geralt in the epilogue.