Shoot the bell to open the door to the left and run through. In the next room you’ll see a yeti up in a cage to the left. Don’t worry about it for now. In this section are a number of plates on the ground, springboards, that will bounce you into the air when you step on them. Run over the springboards in front of the arch and grab onto the highest sloped ledge up above. 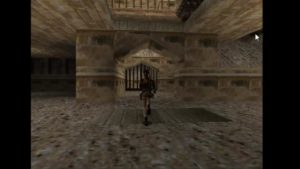 Pull up, run around to the left, pick up the two sets of Uzi clips and pull the lever to lower the cages and free the yetis. Drop down to the right of the switch to the level below. The yetis will run up to attack. Take them out before they get close.

Turn around and run into the passageway diagonally across from this one. 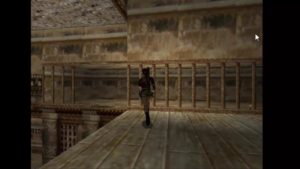 Pull out the second block from the end. It’s a movable block. Push or pull it sideways to reveal a secret passage behind it. There’s a room with a large gap. Stand in the very center and run forwards. This takes a leap of faith as the path to the Golden Dragon is invisible. Grab the dragon and head back out.

Turn left to pick up the large medi pack and then run around to the stairs to the right. You’ll be attacked by another yeti here. At the top is a room with a lever and wooden grates. Pull the lever to lift up the grates. You’ll be able to walk on them later.

To the right of the two springboards in front of the black gates is a single springboard. 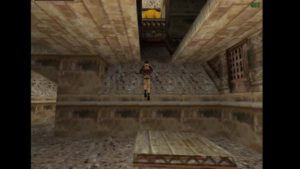 Stand in front of it facing the wall. Walk backwards until you are as close to it as you can be. Hop backwards and you’ll spring upwards. Have your guns ready to shoot the bell when you lined up. This will open the first black gate. 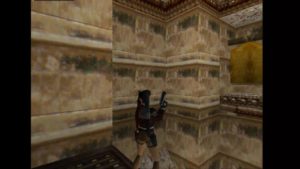 Drop down and run through both open gates. Run forwards onto the springboard and grab the ledge above. Pull up and you’ll see two sloped ledges. Flip onto one of them and gradually make your way to the right as you jump between them. At the end you’ll be able to see another bell. Shoot it in between jumps and flip back to the left.

Climb up through the third black gate and then up the ladder. Hop off to the right, turn around and jump over the gap in the floor to the room beyond. 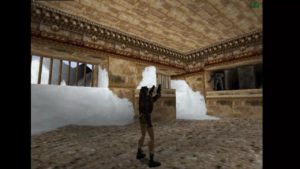 A yeti will attack from the other side of the room. Take him out and go through the same exit where he came in.

Drop down and go up the sloped path to the right. Turn around to do a u-turn and you’ll see a small gap to the left. Run through it and around a corner to find the Silver Dragon. 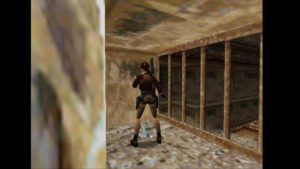 Head back out and this time climb up the ramp on the left to find a small medi pack. Go back to the center and continue forwards. Around the corner to the left you’ll be faced with three tigers. At the end of the room is a colored block pedestal with a Tibetan Mask on top.

Turn around and go back the way you came through the passage to the right. Do a u-turn and Run up the pathway which is now to your left. Keep going forwards and drop down once to the small area with bars and again to the left down to a floor below. You’ll be attacked by a yeti as soon as you drop down so be careful.

Head all the way to the end, past the bowl, to pick up a large medi pack in the corner. Between the bowls is a drop down into darkness. Drop a flare down and you’ll see there are spikes positioned underneath some of them. 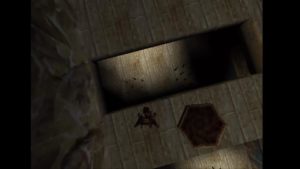 Drop down between the spikes and take down the yeti that quickly attacks. Light a flare and have a look around. In one corner your find a automatic pistol clips. Run around the wall to the opening and climb out. This brings you out to the balcony above the area with the ramp and big doors. Head to the right on the balcony to pick up a small medi pack.

Run back to the wall just outside the opening and place the Tibetan Mask in the slot which opens a door in the dark room. Have a look below for the location of the door. 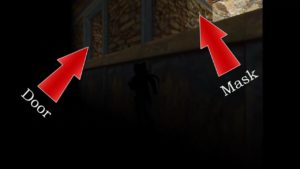 Turn left and go through the passage into the area with the ice lake and firepot. Jump diagonally across to the left and pull the lever. 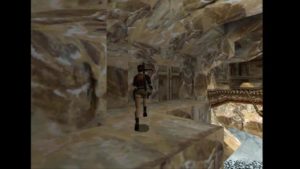 Pulling the lever tips the firepot over and melts the ice underneath. Drop down and kill the two tigers that run at you from the archway to the right. Before diving into the water head to where the tigers came from for two sets of flares. Jump over the rocks and into the water below (where you found the Tibetan Mask in the last level) to find two sets of Uzi clips.

Head back to the ice lake and drop into the water to find the Gong Hammer on an underwater pedestal. Climb out and take out the barracuda before diving back in.

Swim through the hole and get out the other side. There are three yetis here so you may need to jump back into the water if they get too close. There is a spot to the left where you can stand without them being able to reach you. Shown in the pic below. 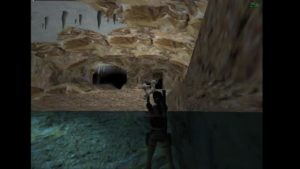 As you get out of the water watch out for the spikes from above. Proceed to the back left of the cave. Another yeti attacks from here. Follow the passage around, take out another yeti that climbs over the low ice wall and then climb over it to find four sets of grenades.

Run back to the large cave and this time take the tunnel on the other side, the far right side when entering from the water. Pick up the small medi pack and take down the yeti that runs at you once you approach the stepped blocks.

Climb up the blocks and through the doorway above. In the next hall are snowballs ready to roll down after you. After the initial snowballs have been triggered make a run for the bottom right of the slope and jump into the passageway. 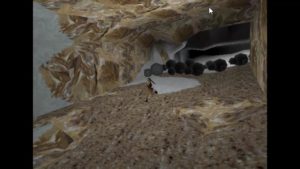 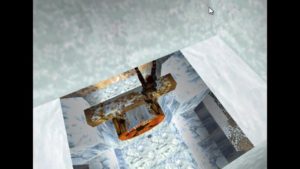 Drop down and face away from the gong. Drop down either to the left or the right to the ground below. You might take a little damage from falling. Head towards the back of the cave, away from the gong, and to the left. You’ll spot a ladder on the side of the wall. Jump over to it and climb down.

Drop down twice to the left and turn around. Pull the lever on the side of the block to open a door to the last dragon. Climb back up the blocks, up the ladder and flip backwards to get back up.

Facing the gong now the building with the Jade Dragon is to the right of the gong. Pick it up (plus four bonus M-16 clips) and then climb back up to the gong by going around to the left side and climbing up the back of it to the top. Get near the gong and press the action key to use the Gong Hammer. 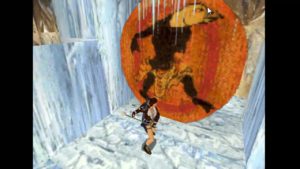 Using the gong will open up the room underneath the gong, accessed from the side, and also release the Guardian of the Talion.

Drop down either side and grab the Talion from the room underneath the gong. Head outside the room and find a safe spot on the ice blocks to shoot at the Guardian. 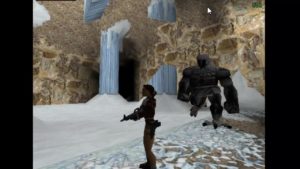 Once the Guardian has been killed the level will end.

Next Level: Temple of Xian (Level 15)