Continue through the dark tunnel. The gate ahead will lift up as you draw nearer to it. Park at the first wooden docking area and hop out of the boat. Kill the two rats and while facing the closed doors take the path up to the left.

Kill the few rats at the top and enter into the building. A man with a club is waiting for you here with a large medi pack. Climb up the wooden block at the end. Take out another rat and pull the switch, opening the large doors near where you parked the speed boat. Another man with a club will run out of the doors. Take him out and head through the doors into the hideout. 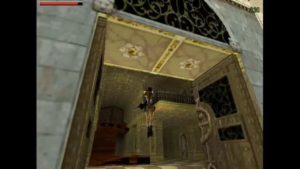 A gunmen is on the upper level and one runs out from the corridor on the right. The one on the right drops shotgun pellets.

Head to the left and shoot the windows. Two dogs will come running through. Run through the window into the room with a glass ceiling and pick up the small medi pack, flares and the auto pistol clips.

Go back into the main part of the building and take the corridor to the left with the three statues with swords. Run between them as the swords lift up into a dark area. Light a flare if you can’t see what’s going on and pull the switch to open some doors elsewhere.

Run back to the brown block in front of the main doors. Jump up and grab it. Climb up and slide down. Make a jump for the ledge and pull up. 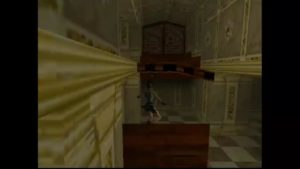 Turn around to the left and push the movable block twice. Turn to the left and do a running jump over to where you killed the gunman on the upper level. Pick up the auto pistol clips that he dropped.

The side wall here is climable. Climp up it and out of the building to the right. Once on the balcony turn to the right to face a gunman on another balcony. Take him out and then turn around to take a running jump to grab the red awning. 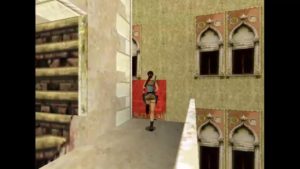 Shimmy over to the left. Climb up and then do a backflip to land on a balcony behind you. Now do a running jump to the wooden ledge. 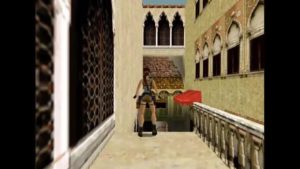 Pull up and do a running jump to land on the next red awning. Turn around and take a standing jump into the house entrance. You may need to press the action key after jumping so you don’t bump your head. 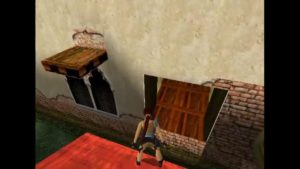 Pull your guns out and kill the two dogs that attack while you run up the stairs. At the top of the stairs turn to the right. A gunmen exits from a room. Kill him and enter the room. Next to the entrance to this room on the right side is a switch. It’s hard to see because of all of the colorful wallpaper.

Pull the switch which opens a passageway in front of the stairs you just ran up to the balcony where you killed a gunman. Go through the passage and pick up the shotgun shells and it’s here where you’ll find the Silver Dragon. 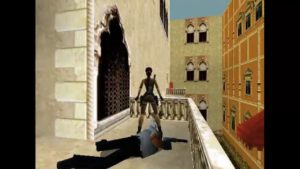 Now head back into the room with the hidden switch and shoot out the window. Jump through it to the balcony. Take out the gunman to the right and pick up two sets of uzi clips.

Continue to the end of the balcony. Shoot out another window and enter the room. As you enter you’ll be attacked by two thugs and a dog. Once you’ve dealt with them push the movable block in the fireplace twice. 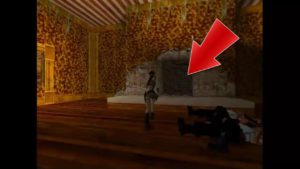 Climb up it and then over the next block to the left. Kill the rat and continue down the passage. At the end is a slide with swiping blades. Jump over the first one and then over the second one. Veer to the right to land in the water.

Continue to the right as far as you can go underwater. You’ll bypass some flames this way. Pull up at the end and jump over the last flame.

A door opens to the right. You can shoot the two dogs and gunman from this high position before dropping down into the room with chandeliers.

Drop down and climb up the first angled pillar. Turn around and jump up to grab onto the chandelier. 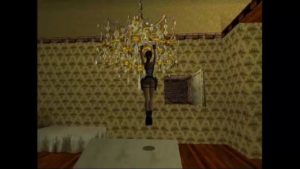 Do a standing jump to a wooden ledge on the other side of the room and get your shotgun ready to take out a thug who climbs over the brick wall to the right. Take him down and then pick up the small medi pack that he drops.

Climb up the brick wall and turn right to face the wooden beam in the center of the room. Do a standing jump to land over to it and pull the switch to change the height of the chandeliers. 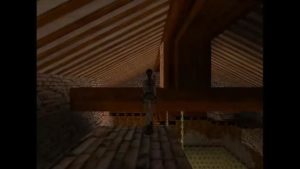 Jump back to the brick wall and then safely drop down to the chandelier below you. Jump across to the middle chandelier and then to the third, lowest chandelier. From here turn to the left and do a running jump to grab the edge of the alcove that opened up. Pull up and grab the Library Key. 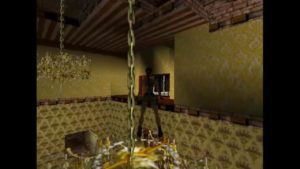 Pull the switch here which opens a trapdoor and then blast out the window and head outside. Follow the bricks to the right to a hole in the building. Safely drop down into the water below.

This is the flooded area in front of the library entrance. Before going into the library we’ll explore the underwater area a little bit first. Swim forwards and pull the lever on the left to open the door next to it. Swim through and down the stairs to the right.

Do a roll and then back past the stairs. Swim forwards and head towards the left. After swimming through a rectangular opening you’ll find a pair of grenades. Swim to the other side of this room to pick up the Golden Dragon. A lever is here to the right that opens a trapdoor above you. Pull it and swim up to take a breath.

Dive back down and go back the way you came to the library entrance. Use the Library Key to open the door and go inside. As you enter a thug attacks from the passageway opposite. He drops a small medi pack. Continue in the direction he came from and climb up a bookshelf to an upstairs room. 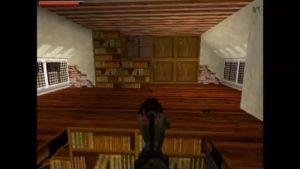 Kill the rats and then climb up the small bookshelf to pull the level on the opposite side of the room. Drop back down and go back to the library entrance. A gunman will attack from the right side. Enter the room he came from, climb up the first bookshelf on the left and before you’re at the top do a backflip to the ledge behind you.

Turn right and climb up the bookshelf to the second window at the very top. Shoot it out and then hop through it. 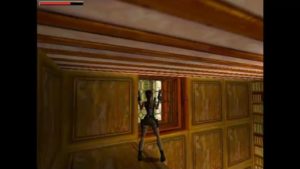 Slide down onto the red awning and jump across to the balcony opposite before you slide off.

Turn around and do a running jump over to the roof and then to the brick wall on the right. 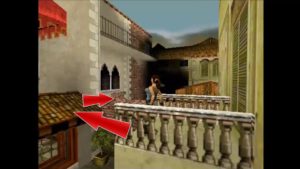 Follow the wall al lthe way to the right. Turn to face the wooden roof and do a running jump over to grab it. Run over to the other side of the roof and do a small jump over to another brick wall. Drop down the hole into knee-deep water and pick up the Uzis on the ground.

Climb back up the wall and drop down to the wooden walkway below. Follow it around to the left and take out the thug with auto pistol clips inside the house. Pick up the Detonator Key from the table and then enter the wooden door on the other side of the canal. 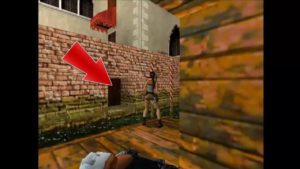 The door opens automatically when you get close to it and you’ll be face with an armed gunman who drops a large medi pack.

From here jump through the window to the right to enter back into the library. Take a left to enter the main hall and pull the lever next to the closed doors on the other side of the room. As you enter two gunman start firing at you.  One drops shotgun shells and the other uzi clips.

Inside the room go through the windows to the left to the gazebo. As you near the wooden door to the right it will open automatically. 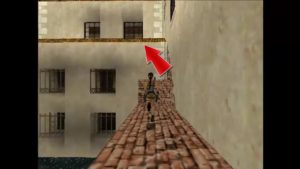 Shoot the window and jump through to grab the Jade Dragon on the table. If you have all the secrets you’ll get four sets of shotgun shells here as well.

Drop back down to the brick walls and use the Detonator Key on the Detonator. A sniper will emerge from a balcony above and on the left. Jump and shoot to kill him.

To exit this level follow the brick walls around to the now exploded house. Straight ahead is a hole in the ceiling that you can climb up. Climb up and then jump over to some blocks on the other side of the room. Climb up then and out onto the roof.

Turn around and jump over to the block on the other side of the hole. Follow the path until you slide down and end the level.