Climb down the hole behind the windmill. This leads to the area Under the Well. The map of it is found on page 29 in the manual. Locations of the chests are circled in red. 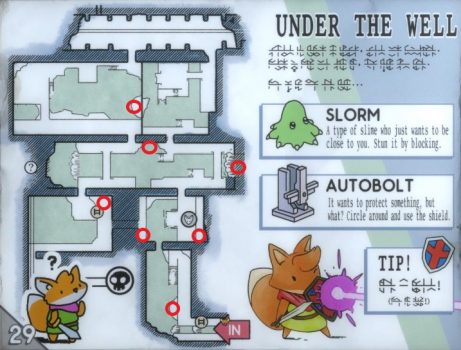 Watch out for the Slorms who explode on death.. Once you kill them you have a couple of seconds to roll away. Climb down the ladder and head down the stairs into the water. The first Chest here contains Pink Powder.

Take the exit to the north to the Checkpoint. You’ll notice a chest on the ledge above it but we’ll come back to it later. Continue to the next room and walk along the platform to the west for Page 33/34/35.  Go into the water and search under the waterfall for a hidden Chest. Inside you’ll find 30 Coins.

Go into the next room to the north and enter the water. Take out the Slorms and come back to the room to the south by the water exit for another Chest with Coins.

Go to the north side of the room and destroy the Turret. Lower down the bridge on the east side to open up the shortcut. Continue to the north and you’ll see a power line running through the floor.

Follow the line to the southwest, kill the Slorms, and enter back into the caverns beneath the well to the south. Enter the water but watch out for the Tentacles. Just keep moving to avoid being hit. Grab the Chest on the sand and the other Chest under the platform. Both contain Coins. 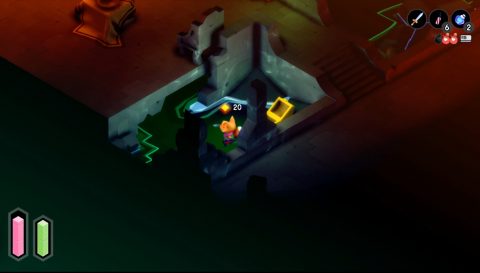 Enter the room to the southwest and climb up the ladder. Open the chest for a Fox Statue. Push into the wall in between the two pillars and a passage will open. 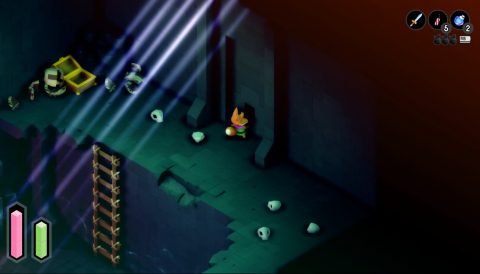 Go through to find a Chest with a Shard on one side and a Golden Coin in the chest on the other side. Come back the way you came and take the exit to the south.

Follow the line down all the way to the power room. Grab the Lamp by the obelisk and then meditate in front of the obelisk to lower it down and power the line. Run back along the line to the northwest, kill the Bats and open the Chest for some Coins. You’ll notice that the wall at the back is now open. 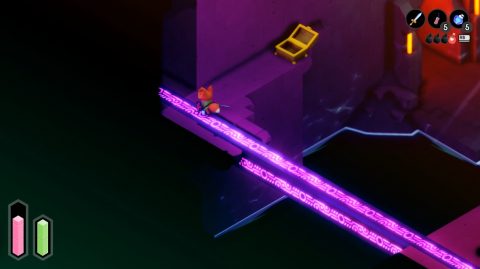 Go inside to find a small room with a chest. Open the chest for another Golden Coin.  Run back 2 rooms to the dark room to the southeast. Now that you have the lamp you’ll notice an exit to the east. Take the exit and you’ll see 3 Rudelings standing around a table.

Kill them, pull the lever to open the gate and go through to a Checkpoint and Page 30/31. Climb the ladder and you’ll end up at the entrance to the Dark Tomb. 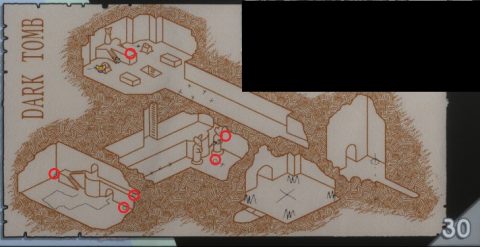 Head along the dark tunnel, kill the Skeletons and avoid the spike traps. When you enter the room with the chest on the platform clear out the room from enemies then light the two skulls on the pedestals on either side. The platform with the chest will slide back revealing a hole underneath.

Go up the steps on the north side and open the chest for and Ability Card. Go back down and climb down the ladder. Take the path to the west to the next room. Then go southeast first for a chest with 3 Fire Bombs, then go to the northwest and take the stairs down.

Open the chest in the corner for a Shard. Work your way around the spike traps to another chest on the south side of the room. Inside you’ll find Coins. Take the exit to the east.

Destroy the statues with the laser traps before walking in front of them or you’ll get fried. There are 3 in this hallway. in the larger room beyond you’ll need to clear out the statues before opening the chest. 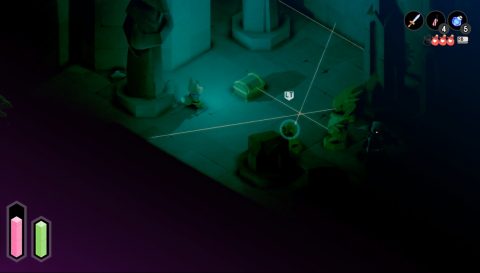 Inside you’ll find Coins. Go behind the large statue to the north and take the secret passage to the northeast for another chest. This one contains a Golden Coin.

Take the exit to the southeast and clear out all the trapped statues. The chest in the center has a Fox Piggy Bank. Pull the large lever to open the doors to the southwest to enter the room with the power source.

Open the chest on the other side for a Fox Statue and then head outside.

You’ll come out by the entrance to the West Garden. Take a look through the telescope and then open the chest for more Coins. 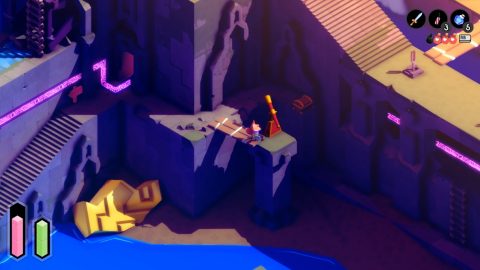 The sign reads “West Garden. Head down the steps and continue along the path to the garden.