Head down a couple of sets of stairs and then destroy the square bushes so you can get to the Chest. Inside you’ll find a Shard of a Magic Potion. 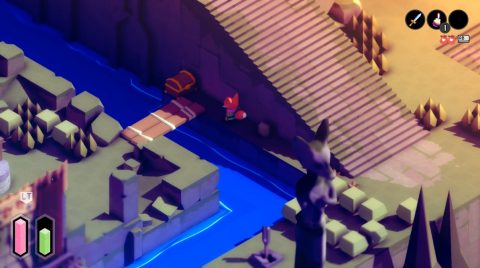 Go across the bridge to the well and kill the Guard by the gate. Just out of sight by the wall is another chest. If you change to focus view you’ll be able to see it. Inside is 2 Dynamite.

Just to the north is the Old House. It’s locked so you’ll need to find a key. Walk to the west, take out the Guards and other enemies and then grab Page 16/17 from the gold platform. 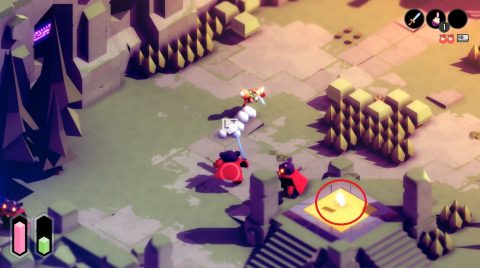 From here there are two paths to go. Up the ladder to the Windmill merchant or down the ramp to the west. If you want to visit the merchant climb up the ladder and enter the well. Buy the Magic Potion and Dynamite if you have the gold, otherwise climb back down and take the ramp down to the west.

Enter through the door with the light coming out of it and go behind the counter. Walk to the east and you’ll find a room with 3 chests. Inside you’ll find a Pink Flower, Gold and 2 Dynamite.

Head back out, take out the Guards and go to the yard with the pool. You can’t get the Page in the center just yet but you can take the secret path down behind the trees. 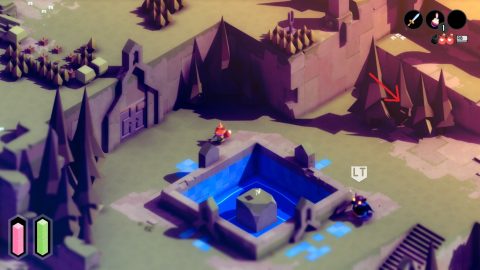 Open the Chest just inside the room for a Golden Coin. Head back out and climb up the spiral steps so you can pull the Lever and open the gate.

Walk down the steps and the next set of stairs. The Old House Key is next to the tall Guard with the spear. To get rid of him throw a Fire Bomb. 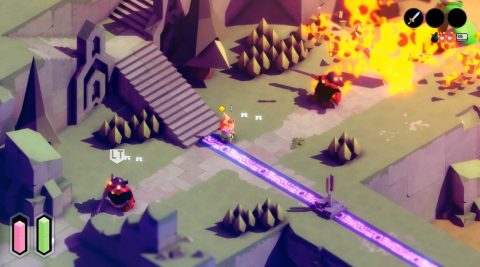 Once the Guards are out of the way pick up the Old House Key. Run past the turret that pops up to the southwest and open the Chest around the corner for the Lucky Cup Ability Card. When equipped in your inventory enemies will have a 15% chance of dropping a heart when killed.

Go back to where you picked up the key and climb down the ladder. Follow the path behind the ladder and head around behind the waterfall to the beach. 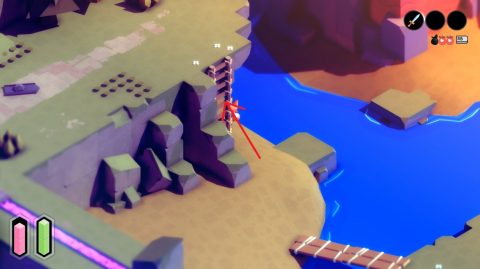 Pick up Page 32/33 under the bridge and then open the Chest on the other side. Inside you’ll find a Golden Coin.

Go back the way you came and head under the walkway to the southwest. Quickly run past the Turret and go over the wooden planks for bridges.

From here throw some Dynamite on the Turret that pops up on the stone walkway and open the Chest. 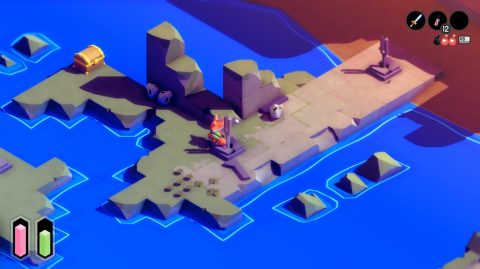 Inside you’ll find a Lure. You can drop this in combat to create a fake version of yourself and distract enemies.

Go back and climb up the ladder. Past the Turret to the right…

Go back the other way and enter the cave. Inside there’s some kind of power source. Climb up the ladder and take the upper exit to the northwest. Follow the path around and it will take you up to the Windmill.

Climb down the ladder in front of the windmill and enter the Old House. Inside is a Chest with one Gold. Take the exit to the north. Follow the path to the northwest and cross the bridge for the Shield. 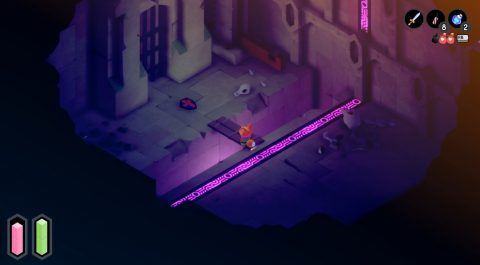 Hold the RT to use the Shield in combat. Pull the large Lever to open the gate and go through. In the next room you’ll see a door hiding a secret. Look at the line on the door and follow it from the left side. 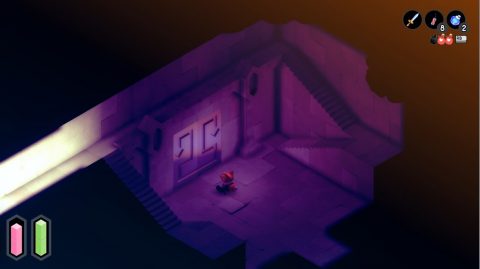 Use the D-Pad and press Up-Right-Down-Left-Down-Right. The doors will open. Go through to find Page 52/53.

Head up the stairs and take the exit to the southwest. You’ll be outside by the temple just past the waterfall. Follow the path to the northwest and open the chest for a Dragon Tooth if you haven’t picked it up already.

Go over the rope bridge and kill the Bats that appear from the skulls. Walk under the waterfall but don’t worry about the cave behind it for now.

Continue to the southwest past the entrance to the Dark Tomb. Kill the Guards and open the Chest for a Chile. You can use this in combat to increase your Attack. Climb up the 3 ladders for another Chest with a Pink Flower.

Climb back down and follow the path to the south. Head over the bridge and use your Shield to block the Turrets attacks. Run up to the Turret to kill it, open the Chest for Gold and then lower the bridge leading to the Well. Just in front of it is Page 18/19.

Lower the other bridge making a shortcut back to the Windmill. We’ll be exploring the tunnels under the well next time.

Next: Under the Well/Dark Tomb