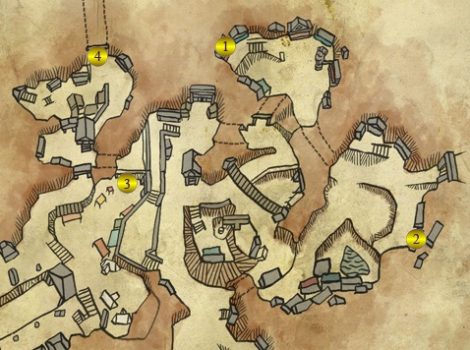 To lift the curse surrounding Vergen you’ll need to find four artifacts of war. One of them is the Dun Banner Standard which you’ll find in this quest.

Make your way to Cecil Burdon (#2). He’ll give you information about the battle and how it ended. It turns out another sorceress, Sabrina, cast a firestorm which killed just about everyone. He’ll tell you that the Dun Banner Standard was placed in the Dwarven Catacombs to the north of Vergen.

Before heading out to the Catacombs stop by one of the sellers, Felicia Cori (#3) and buy the Surgical Tools. You’ll need them to investigate one of the corpses in the With Flickering Heart quest. 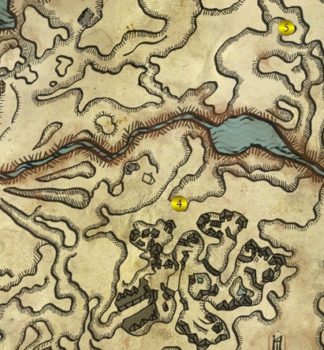 You’ll see many corpses here but if you uncover the wrong ones you’ll only spawn Wraiths. There are also many breakable walls in this area so keep an eye out for walls that don’t look very solid. 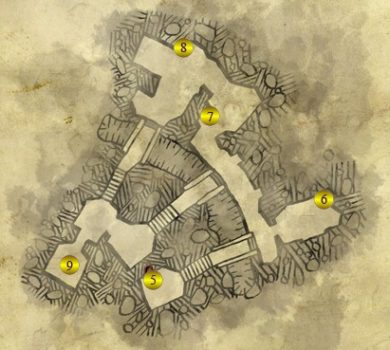 Search the corpse in the Room (#6) to find a Silver Sword called Fate. In #7 you’ll find some lore on the Wild Hunt and at #8 you’ll find a Corpse with a piece of metal in it that you can take out if you purchased the Surgical Tools from Felicia.

Lastly make your way to #9 and speak with the ghost of Ekhart Henessy. He’ll ask you a few questions about the battle. If you answer correctly you’ll deceive the ghost into thinking you are the Dun Banner. If you don’t know the answers you can just kill him. The answers to the questions are below.

The positions of the northern armies – Respond by saying “You got it wrong.”
The name of the chief Nilfgaardian commander at Brenna – Menno Coehoorn.
He won’t be able to attack the North again – “Coehoorn is dead.”
Names of northern army leaders – Vandergrift and Seltkirk.
How did you survive the battle of Brenna – Biggerhorn took me prisoner.

If you have the Dun Banner Cloak from defeating Skalen Burdon at dice poker three times and the Beaver Cap from Baltimore’s Nightmare you’ll be able to make two mistakes and still decieve the specter.

Search the nearby sarcophagus to find the Standard and a Sword of the Dun Banner.