This is the second level of the Gormorg Temple with a few tricky parts including a large cavern with Ogres and a trapped shrine. By now you should be fairly well equipped to deal with anything Grimrock can throw at you. 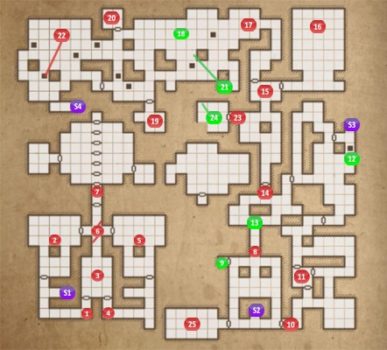 1. You’ll need 2 Round Keys to progress. The first Round Key can be found here and is used behind the banner at #2.

2. Use the Round Key on the lock behind the banner to lift up the walls on the western part of the room. This will release Ice Lizards and Shrakk Torrs and also reveal a Statue Head and 2 Tar Beads.

4. Behind the Gate you’ll find the second Round Key. In this passage you’ll also find another of Toorum’s Notes and a Lever to open the Gate to #5. When you pull the Lever at the end of the passage the Gate will open but also two walls will open up behind you. After defeating the Uggardian and Shrak Torrs who comes out of one of them go into the new passage for the Gauntlets of Valor.

5. Tear off the banner and use the second Round Key on the lock. This raises the walls releasing more Shrakk Torr and Ice Lizards. It also reveals a receptacle. You can find on of Toorum’s notes on the floor.

Two Goromorgs will attack as soon as the walls are open. They have a variety of spells and a shield that you need to break through before you can damage them. Once they’ve been defeated search the western room for Throwing Axes and a Baked Maggot and the eastern room for 2 Crossbow Quarrels. In the western room there’s also a Button that activates a Teleport in the center of the large room, but also spawn in another 3 Goromorgs. When you are ready take the Teleporter to the Crystal of Life.

9. This is the last Iron Door of the game. Tear the Banner next to the door and place a Red Gem (from #3) on the shelf to open the door. Inside you’ll find a Throwing Axe and the Crookhorn Longbow.

10. This is the only door you can open from this side. Beyond this door are more Shrak Torrs and Goromorgs. If you keep your eyes open you’ll find Alchemy Herbs, Bombs (on a few shelves in the north) and a few other small items.

11. Small room with a couple of Shrak Torrs and the Greaves of Valor, the last item in the Valor armor set.

12. Drop down the pit and get ready to face 4 Giant Crabs. Once you’ve killed them search around for Tar Bead, Cave Nettle, a Shuriken and 3 Frost Bombs. The secret isn’t here so head up the stairs. On the shelf you’ll find the Shield of the Elements. Stand on the Pressure Plate to open the metal door.

13. Press the small Button on the wall to open the wall behind you leading back to the Crystal of Life. You’ll also find 2 Blooddrop Blossoms, 4 Fire Quarrels and one of Toorum’s Notes. To the west of the Button you’ll find a Full Helmet on the ground.

16. The Shrine. When you enter the Shrine it all appears empty except for an alter with the first of the two Ornate Keys. When you pick up the key Tentacles and Goromorgs will appear. The best way to survive is to quickly run out of the Shrine and fight the Goromorgs from the entrance. Once they’ve been defeated you can go back inside and clear out the remaining Tentacles.

17. The Cavern. Inside the cavern you’ll find wandering Scavengers and Ogres. As well as the final resting place of Toorum.

18. Drop down this pit for a secret. All of the trapdoors in the Cavern lead to the same basement but this is the only trapdoor that will drop you down into the secret area.

A. This is where you drop down at the pit at #18.
B. The Icefall Hammer. When you pick it up you’ll have to deal with Giant Crabs and a variety of Herders.
C. The last Skull for your Minotaur.
S1. Fight your way through the Slimes to the stairs leading back up the Cavern. This will take you to S4 on the main map.

19. A few Scavengers and another one of Toorum’s Notes.

20. Ice Lizards which you can kill for more food and some Throwing Axes.

21. Toorum’s Remains. Press the small Button on the pillar to open up the passage. This is the final resting place of Toorum. He made it quite far considering he was alone. Luckily the Life Crystals will work with even dry bones. Pick up Toorum’s Remains and bring them back to a crystal. Use them to click on the crystal to bring him back to life. Next time you begin a game you can type in the name “Toorum” as your first character and press enter. You’ll begin the game playing as Toorum! See the video below.

23. Use the two Ornate Keys from The Cavern and The Shrine to open this door.

25. Pick up the Prison Key, open the door and head down the stairs at s2 for the final section of Legend of Grimrock.

S4. Stairs from basement under the Cavern.