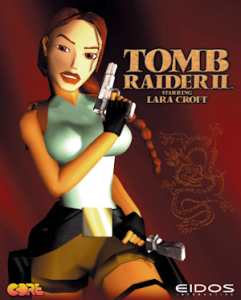 Tomb Raider is a classic adventure/action game released in 1996. It was hailed as one of the best action adventure games to date and starred the sultry British archaeologist, Lara Croft, who goes in search of a mystical relic in the tombs of Peru.

Tomb Raider 1 spans 15 levels and includes exotic places such as ancient ruins in south America, Africa and even Atlantis. The controls for Tomb Raider area  little dated but the gameplay and story line are still fantastic.

Lara is hired by the CEO of Natla Technologies to go to Peru and find a coveted artifact. During her journey there she realizes the artifact is only a small fragment of a much larger ancient relic. She travels around the world, finally ending her journey in the city of Atlantis.

Each level has a number of secrets that you can find. I’ll include locations for all Tomb Raider secrets in the walkthroughs for each level.

While the controls may seem a little difficult by today’s standards once you know all the movements you should have no trouble navigating Lara around the caves and cities. Here are all of the possible movements/actions for Lara.

Level 1: The Caves – After losing her companion to wild wolves Lara enters the caves in search of the hidden artifact.

Level 4: Tomb of Qualopec – Hidden inside the tomb is a piece of the Scion. Find it and make your way out again.

Level 5: St Francis’ Folly – Find the four keys from the four rooms of the Gods while avoiding being sniped by Pierre DuPont.

Level 7: Palace Midas – Find the control room to open the doors which are hiding the lead bars. It’s rumored here that it’s possible to turn lead into gold!

Level 8: Cistern – Find the keys, flood the cistern and make your way to the exit while watching out for crocodiles and sewer rats.

Level 9: Tomb of Tihocan – Work your way through the passageways to the tomb. Here you’ll have your final confrontation with Pierre DuPont.

Level 10: City of Khamoon – Lara travels to Egypt to find the final piece of the Scion.

Level 11: Obelisk of Khamoon – Locate the four artifacts and take them back to the Obelisk.

Level 12: Sanctuary of the Scion – Enter into the giant Sphinx.

Level 13: Natla’s Mines – Lara was apprehended by bad guys but managed to get away. Recover your weapons and take down each of the bad guys.

Level 14: Atlantis – Make your way to the top of the Great Pyramid.

Level 15: The Great Pyramid – Get ready for the final battle!