Lara will drop off from a helicopter near to the Great Wall. Run forwards through the cave, hop into the water and climb up the other side on the left. I’ll try to include as many pictures as I can but feel free to watch the video if you aren’t sure what I’m talking about. 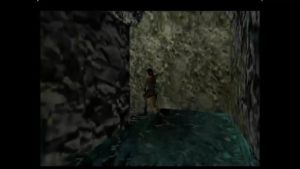 Jump up the block ahead of you and run along the ledge. Jump diagonally across to another block and continue running around the ledge. 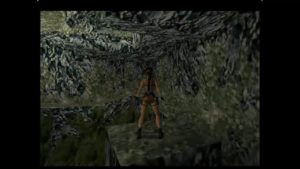 A tiger will appear down below. It won’t hurt you unless you drop back to the starting area.

Run around the ledge and jump up the block at the end. Do a 180 degree turn, hop back and do a running jump to the ledge opposite. When you get to the wall turn to the right and jump across to another ledge. Follow this forwards to pick up Secret #1, the Silver Dragon! 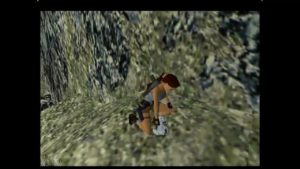 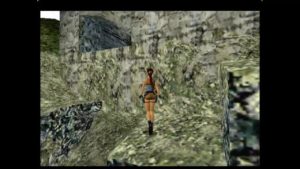 Do a running jump diagonally across to the ledge under the window. Jump up and climb into the guardhouse. Turn right and walk onto the collapsing floor tile to the pool below.

Climb up the stairs and do a running jump across to the switch. Pull the switch to open the door.

Run through the door which takes you outside the guardhouse to the Great Wall. Kill the three crows that come flying towards you. 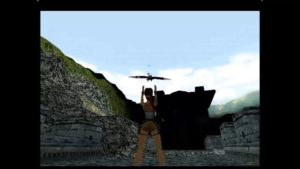 Once the crows have been taken care of slide down the gap on the right side of the wall to the pool below. Immediately to your right under water is a small cave with the Guardhouse Key in it. 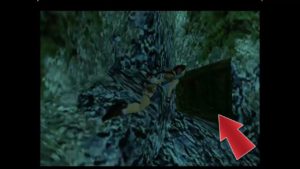 Once you have the key a Tiger will appear somewhere around the pool. To get back up you’ll need to climb the mossy blocks to the right hand side when facing the wall. Climb up the blocks and then back up to the top of the Great Wall.

The next Guardhouse is to the right. Use the key to open the door and go inside. Kill the spiders, go up the ladder, kill the last spider and grab the Rusty Key.

Drop back down and use the Rusty Key on the door underneath. As you run through three spiders will drop down in front of you and one behind you. They’re pretty darn tough for spiders! Once you’ve killed them pick up the medpac and shotgun shells in the corner as you enter.

Push or pull the block at the end out of the way and slide down into the bladed pool area. 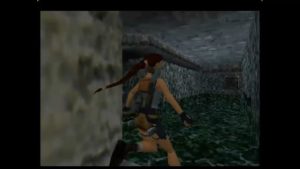 Drop straight down into the pool. This is shallow enough to walk over to the left wall. Grab hold of the crevice in the wall and shimmy over to the right. Drop down at the far end. Dive under the blades behind you and climb up into the small passage.

This is where it starts to get interesting! Run forwards and over the collapsing tiles. Immediately turn right as two boulders will start rolling down behind you. Jump over the spikes and slide down to the room below.

As soon as you land the spiked walls will begin to close. Do a left flip and pick up the automatic pistol clips. Jump forwards and climb up into the passageway before the walls close on you.

Run forwards and jump three times over the blades. Pick up the Jade Dragon before the walls squash you. 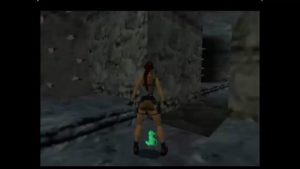 Run out and hug the wall to the right. Slide down at the end to another room with spiked walls. Behind you to the left is a collapsible tile. Stand on it and drop down to the cave below.

Phew! If you’ve managed to survive all of that and picked up the Jade Dragon you’re doing really well!

Pick up the medpac just in front of the rolling blades and run around them to the passageway beyond. You’ll see a zip line here that will take you to the end of the level. Spiders will drop down as you approach. We’re still not done here yet so look over the edge of the ledge to the right of the zip line. You can safety drop down to a block here.

Jump up to grab hold of the crevice and shimmy across to the right. At the end climb up into a cave. Run along the passage and pick up the flares as you go. You’ll come to a ladder. First take the ladder all the way to the bottom and follow the passage out to the large cavern under the zip line.

As you go out into the open a T-Rex will charge at you! 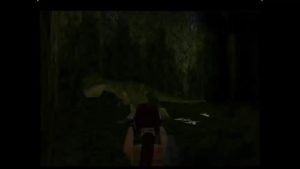 Take it down from the safety of the passage. When it’s dead run all the way across to the other side of the cavern and pick up the Gold Dragon along with a medpac, two grenades and a grenade launcher.

As you pick it up another T-Rex will appear behind you. Once again you can safely shoot it from within the passage where you found the dragon.

Once it’s dead head back to the ladder and climb up, all the way to the top. Take the zip line down to the other side and use the shotgun to take out the two tigers.

Walk through the passage and approach the door to finish this level. We’ll be heading to Venice next.