Pick up the large medi pack and the two sets of Uzi clips before approaching the guardian. He won’t come to life just yet so you’ll need to squeeze past him.

In the room beyond the guardian in front of the lever ahead will come to life and attack. Keep flipping and firing until you’ve killed him then go and pull the lever. This lever animates the guardian behind you and is not essential.

Animate the two other guardians by pulling the lever on the side of one of the orange pillars. This also open the exit of this room. Take out the two guardians and then head through the exit. Hopefully you have plenty of medi packs spare by now.

Head into the dark room and draw out the thugs a couple at a time. They’ll throw knives at you so keep jumping to avoid being hit. The first two drop two sets of Uzi clips and a large medi pack.

There should be another four thugs as you move further into the room. They drop more Uzi clips, a small medi pack and the Mystic Plaque.

Use the Mystic Plaque on the lock by the door to open it and head through into the Dragon’s Lair.

Drop down to the dragon’s lair. If you want you can dive down the first hole to the left for some more goodies but if you get too close to the center the dragon will awaken.

Once the dragon comes to life hide behind the pillars to avoid the dragon fire. This boss battle is actually pretty easy as the dragon doesn’t move. Just make sure his head is hidden behind a pillar and fire away until he rolls over. 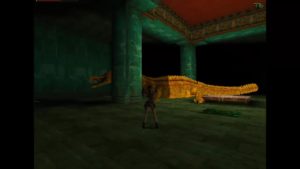 When the dragon has been killed run up to his belly and pull out the Dagger of Xian immediately otherwise it come back to life.

A gate to the left opens. Run through it, avoiding the falling rocks until you’re out of the Dragon’s Lair.

Congratulations, you’ve found the Dagger of Xian but the danger isn’t over yet. The next level is a little closer to home.