This is a different level with what appears to be green jade floating throughout the level. Head off the green path to the left to find a small medi pack. A flying warrior will start approaching you from a distance. If you spot him he’ll be easy to take out as he only has melee weapons and moves slowly through the air. 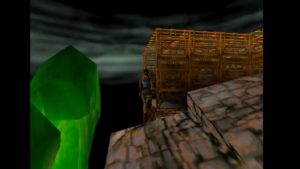 Pull the lever inside to open a hatch at the bottom of a floating house. At the edge of the enclosed area take a standing jump to the green jade diagonally to the right. You’ll slide off but grab the edge before you drop. 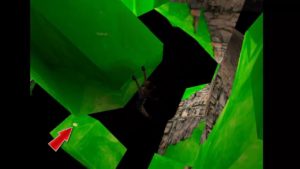 Drop down safely to the rock below. Take a running jump across to the jade platform with the Mystic Plaque and pick it up.

Take a running jump across to the next jade rock and then over to the island with the floating house. Backflip to the jade rock again so you can take out the warrior without being hit. Only one of them will come to life for now.

Climb up the hatch into the house and grab the second Mystic Plaque and two sets of Uzi clips, large medi pack and flares. A second warrior will come to life. Try to take him out through the hatch otherwise it could be a difficult fight, or drop down and run back to the jade rock so you can’t be hit.

When facing the house climb up the rock on the left next to the tree. Turn around and jump to grab the roof of the house. Pull up, run to the other side and grab the Jade Dragon. 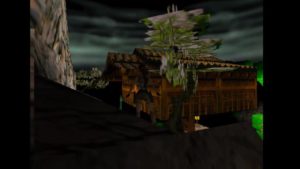 Now head over to the right side when facing the house. Drop down backwards and grab on. You’ll see a cave underneath. Drop down to it and pull up. Inside this jade cave to the left is a lever that opens the gate on the other side of the room. 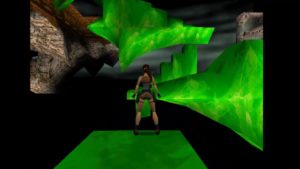 Take a series of three running jumps to make it to the stepped jade rock at the far end. Climb up the steps and turn right. Take a running jump to the central jade rock. Turn to face the floating island to the left.

Take a running jump to the floating island and use the two Mystic Plaques on the left and right pillar either side of the doors.

Secret Path to the Dragon

Head through the doors and ss soon as you enter this garden area turn to the right. Just behind the tree is an entrance to a passage. Jump over the slope to and run through to the end of the tunnel where you can pick up the Silver Dragon.

Run back the way you came. A floating warrior will be approaching the island slowly from the direction of the bridge. 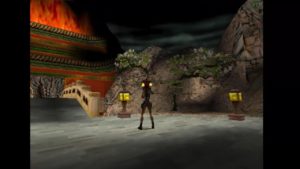 To the left, facing the bridge, is a green jade sloped rock. Jump onto it and proceed up the slope to the jade boulder. Walk up to the boulder and turn around so you have your back to it. Do a backflip over it and slide down the slope on the other side. 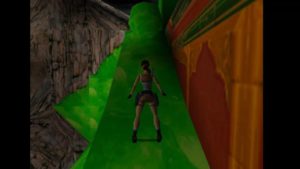 Turn around and go up the walkway about half way up. Turn to the right and take a running jump to grab the edge of the jade rock island. Pull up and take the zip line through the hole in the wall so you can drop onto the bridge.

Turn right and head into the room with the curtain. As you enter the curtain will raise and one warrior will attack. The other two warriors will come to life when you pull the lever which opens the gate at the end of the zip line.

Kill the warriors and use the zip line at the other end of the room. Climb up the grating and then up the next wall to get off at the right. Walk to the edge of the jade and drop backwards, grabbing onto the edge. Shimmy across to the left and drop to the corridor below. Head around the corner and drop down the hole to the right.

A flying warrior will make his way towards you. Shoot him down before he gets close and then pick up the small medi pack.

Climb back up the hole in the wall and then up the sloped jade pillar. 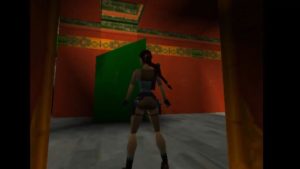 Jump up to the rooftop above and climb over the roof to the left. On the other side you’ll see the jade walkway again. Walk up it to the half way point and then do a running jump back to the zip line. Take the zip line through the hole, over the bridge and through the now open gate. Hang on to the very end.

Turn around and jump diagonally over the gap to the right. Turn around to the left to face the flaming wall. Two flying warriors will make their way towards you. It should be easy to take them out before they get close. 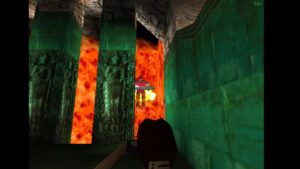 With the warriors gone push the movable block towards the center gap so that you can climb onto it and up to the ledge above. On the right side of the pillar is a lever. Pull it to drop a block into the center gap.

Drop back down and look into the center gap. Hang off the edge and drop onto the block in the middle. Turn around a pull the lever to open a trapdoor in the lava. Head out and climb up the blocks to the left to get out of the center gap.

Climb back up to the high ledge again and then climb onto the low wall behind the pillar. Here you can pick up two sets of M-16 clips. Go to the center and take a running jump to dive into the open trapdoor. 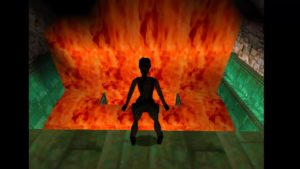 Pick up the shotgun shells and pull the lever on the other side of the room to open a gate at the end of the zip line.

Go back into the water and swim down to the left. Follow the tunnel along until you can pull up again. Pull up onto a platform and pull the lever to stop the swinging blades. Head past the blades and climb up three jade blocks to the area behind the zip line.

Turn right and go back into the large jade room for now. Push the movable block so that it’s next to the wall near to the zip line. 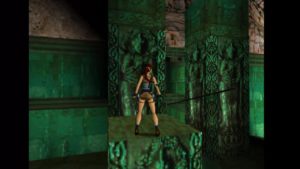 Take a standing jump to the higher passageway. Ignore the closed gate to the left and take a running jump over the spikes to grab the crevice. Traverse to the right, pull up and pull the lever to open the gate you passed earlier.

Turn around and take a running jump diagonally across to the higher ledge. If you don’t make it head back out by jumping across the gap, climbing onto the movable block and back into the passageway. This time go through the open gate to the left.

You’ll notice a square room with a hole in the middle. 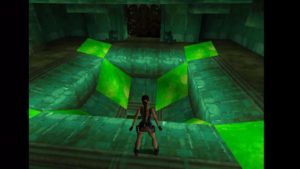 Place yourself in the center, turn around and drop down backwards to the prison room below. Pull the lever to open the cage and get ready for a big fight with knife-throwing thugs. As you get close to the warriors in the alcoves to the left, right and in the passageway ahead, they will come to life. Take them on one at a time. To stay safe jump to the block above the lever so you can’t be harmed.

Continue up the steps picking up the two sets of grenades along the way. When you get to the gates at the top pull the lever to alert the guardians and then close it again. You can shoot through the gate to kill the guardians without letting them through.

Pull the lever and head through the gate back into the square room. Enter the gates to the right and climb up the lattice. 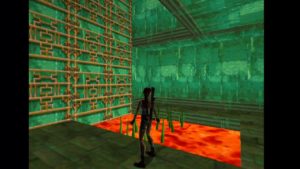 Near the top do a backflip and grab the lattice behind you. Continue to the top and head left when you reach the colored blocks. Do a backflip to grab the lattice behind you. Climb up to the top and traverse as far as you can to the left. Pull up and backflip/jump until you are on level ground. Take out the thug and walk to the end of the passageway.

Standing across to the flat bit of rock to the right side. 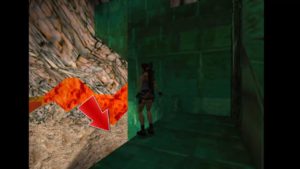 Slide down and then jump over the next slope. You should be standing right about here. 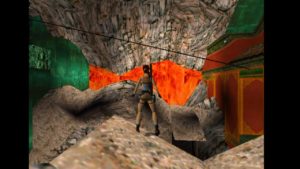 Turn around and hop backwards and slide down onto a flat bit of rock. Turn around and do a running jump to the tunnel ahead. Run through it to the balcony and pick up the Golden Dragon. Head back to the open cave.

Walk to the edge, hop back and do a running jump to grab the sloped rock ahead. Pull up and do a backflip to land on the ledge above the cave. 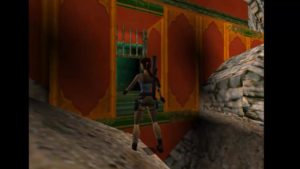 Take a standing jump through the open gate to end the level.