After stepping through the mirror the three heroes find themselves in an ice landscape and captured in cell!

The three heroes have been placed in a cell. There’s no way to open the door so they must hide themselves so the guard thinks they have escaped. Place a box on the spikes and then jump up to it. 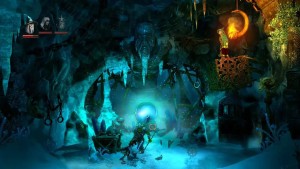 The guard will open the door to see what’s going on, allowing you to kill him and escape.

Watch the spikes. Jump onto a box or barrel and over to the next checkpoint.

In the next area you’ll find a large crevice with a sparkly area on the left side. 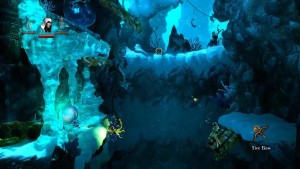 Destroy the rock wall to the right side and then use Zoya to grapple across. When she stands on the wooden platform the upper wooden door opens up. Have Zoya stand on the platform a little and shoot an arrow to the water bulb. She’ll need to stand on the platform while the water flows down to the sparkly area. This will grow some bouncy leaves for you to get up.

If you go as high as you can and to the left there’s a secret path where a snowman appears. 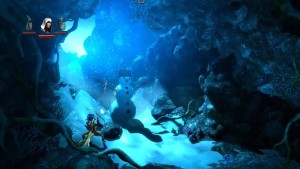 Continue to the right where you’ll be attacked by goblins and find the next checkpoint. Just past the checkpoint is a very slippery slope with flamers.

If you make a plank and anti-gravity field half way up the slope you will be able to jump across. 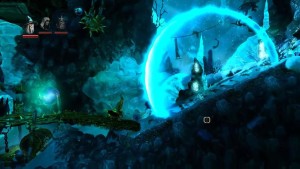 The next area has more spikes and spinning blades. You can slow them down with an anti-gravity field if you want.

Hit the next checkpoint and break the rocks in the roof. This will allow the sunlight to shine down. You’ll need to lift the crystal up so that it reflects the sunlight into the medallion. 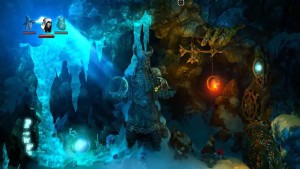 It’s easiest to do this by holding a box to the hand but you can also have someone balance on the other hand as well. Once completed this will open the door to the right.

Outside now you’ll have to traverse some slippery slopes and falling rocks. Across the other side get ready for a fight with more goblins, including one with two fire swords.

The next puzzle includes a button over a large gate with a flappy platform just below it. 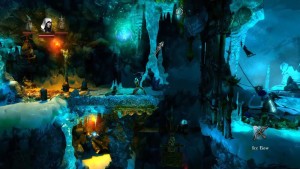 Hit the button with an arrow to lift up the flappy platform. Jump down to it and quickly destroy the rock wall to the left. Jump or swing over and pull the lever to open the gate. The flappy platform should stay up once you’ve pulled the lever. Oh, and watch out for the fireballs as well!

In the next area destroy the rock wall preventing the gears from moving and then pull the lever to drop down on the elevator. Get ready to block or dodge the flames on the way down.

To the left is the first secret chest of this level. Pull the pipe piece down from the roof and drop it into the lava just before the chest. 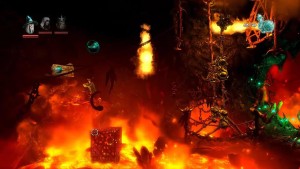 You can now place a box on the pipe piece without it disintegrating and jump over to the chest. Inside this chest is a collectible painting.

Continue to the right past the checkpoint. As you push the button a barrel will roll into the lava. Jump onto the barrel and across to the other side before it explodes.

To get past the next puzzle: 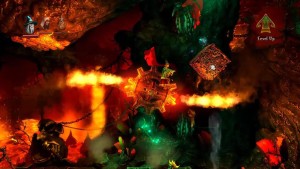 Grapple up to the wooden platform on the roof. Swing onto the flame thrower. Make a box over the stream of air and jump onto it across to the other side.

More goblins will attack you now and once you’ve killed them you’ll hear a conversation in the distance between two shady characters.

In the next area there are pipes on chains above which don’t seem to help much. You’ll have to jump on the moving platform over the lava and dodge the spiked ball to get across. Do the same thing on the other side with the lava pool and gear in the middle.

Use an anti-grav field to slow down the swinging spiked balls. 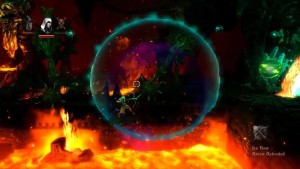 The next area contains two mirrors and a lava flow. The exit to the right is completely iced up. You’ll need to melt it to get through. Before you do this make sure you open the secret chest to the top right. 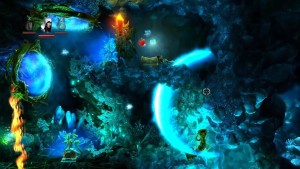 Position the two mirrors as shown in the picture below to melt the ice and reveal the exit. 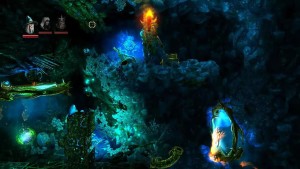 Move the mirrors out of the way and head on out into the cavern beyond. Slide down the icy slope to the outside.

Jump over the wooden platforms and kill the goblins that attack near the mammoth skeleton.

Once you’ve taken out the goblins you’ll come to an area with a slippery slope and a giant snow ball held back by a rock wall. 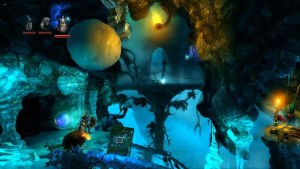 Place a box on the slippery slope and jump on it so you can get a good angle to destroy the rock wall. This will drop the snowball down which will block up the drop to your death at the end of the slide.

Now you can jump onto the snowball and up the next ledge to your final battle of the level. A fight with the Giant Ice Goblin. 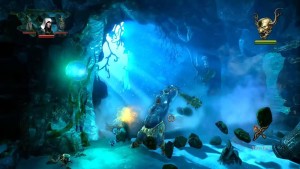 Once you’ve killed the Ice Goblin destroy the large wall to the right and climb up to the outside world where the path stops. A tree branch will grow, allowing you to continue across the chasm and end the level.

Get ready for an epic battle in The Final Chapter.