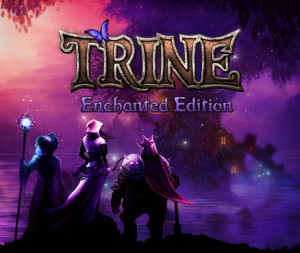 Trine: Enchanted Edition is a beautiful action/puzzle game set in a fantasy fairy tale world. The puzzles are physics based so objects will move based on momentum and gravity.

You control three characters each with unique abilities. The world is being overrun by hordes of undead. These three heroes must work together to restore balance to their world.

The Enchanted Edition was released in 2014 and brought the original Trine game up to speed with Trine 2 with enhanced graphics and online game play.

In Trine you play three characters whose souls have been merged together. At different points in the game you will need to use the various abilities of each of them to progress. Sometimes there are multiple ways to overcome an obstacle so if one character doesn’t work try another one.

Thief (Zoya) – The thief has a bow and the ability to shoot arrows. She also has the grappling hook which makes it easy to swing between ledges.

Wizard (Amadeus) – The wizard has some unique abilities including being able to materialize a cube and telekinesis (moving objects at a distance).

Knight (Pontius) – The knight is the brute strength of the party and comes armed with a sword and shield.

Switching between characters is instantaneous and you can change characters by using the 1, 2, 3 keys for the Wizard, Thief and Knight respectively. Alternatively you can switch backwards and forwards using the c, v keys. The heroes will advance their skills as you progress with the game.

Level 1) Astral Academy – This level is more of an introduction to the characters and their abilities more than anything else. There are 15 experience potions here and all of them are fairly easy to find.

Level 2) Academy Hallways – Now we go deeper into the Academy. This level is far more complex than the first intro level and has 25 experience potions to find as well as 2 secret chests.

Level 3) Wolvercote Catacombs – Now we enter deeper into the lands of the dead. You’ll meet your first boss here as well as learn a cool new skill for the knight.

Level 4) Dragon Graveyard – A fun level to play with a new spell for the wizard to pick up, two new items and 25 potions to find. Great thunder and lightning effects as well as giant dragon bones!

Level 5) Crystal Caverns – Another beautiful level with glowing crystals and clear water. Lots of potions to find. 30 in all with a couple of secret chests as well.

Level 6) Crypt of the Damned – This is a fun level where the thief gets to learn the fire arrow skill. There’s only 20 potions to collect and two secret chests. If you survive the boss fight the last two potions of this level are very tricky.

Level 7) Forsaken Dungeons – With 30 potions to find, 20 experience points from killing skeletons and a boss fight you’ll really enjoy this level. Some of the potions are very tricky to find so make sure you check out the walkthrough for detailed descriptions and pics of every potion location.

Level 8) Throne of the Lost King – The castle has been taken over by the undead and what once was a beautiful citadel is now fallen into disrepair.

Level 11) Ruins of the Perished – Zoya is quite attached to this once beautiful place which is now in ruins. There are a lot of potions scattered about and two secret chests to find.

Level 12) Heartland Mines – The mines are a tricky place to navigate with broken bridges, falling rocks and spiky balls to deal with. Be prepared to die a lot unless you are very good with Zoya. There’s 25 potions to find and a new skill for Amadeus.

Level 13) Bramblestoke Village – The village of Bramblestoke has been abandoned except for the skeletons. Find all 30 potions and the two secret chests before finding your way out of this forest.

Level 14) Iron Forge – The longest and hardest level in the game will be quite a challenge even for experienced players. Make your way through the Iron Forge gathering all 35 experience potions along the way.

Level 15) Tower of Sarek -Finally we come face to face with Sarek and try to rid the world of this evil. Climb to the top of the tower and find the Trine.

Level 16) Path to New Dawn – Not officially part of the main game but a bonus level just like the Tower of Sarek but with a different setting.

Trine Enchanted Edition was published in 2014 by Frozenbyte. This is a remade version of the original Trine which was published in 2009 and features enhanced graphics in line with the Trine 2 game. The three playable characters are the Wizard, Thief and Knight.

The remade version, Trine Enchanted Edition, has received overwhelmingly positive reviews on Steam with 96% of players saying they like this game. The original version also one the “Best Downloadable Game” at the Electronic Entertainment Expo the year it was released.