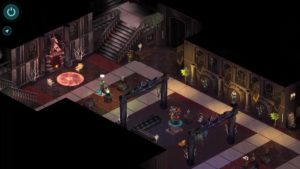 The Estate is quite an impressive place and it’s owned by one of the richest elves in the country, James Telestrian III.

First speak with Officer McKlusky and then Mr. Quoth who’ll let you into the estate. Talk with James Telestrian III who will bring you into the library for a meeting.

After the meeting you’ll be given 10,000 Nuyen to hire a team. Have a chat with everyone and replenish any supplies or upgrade your equipment. Aljernon is here with his usual assortment of spells and strange items. Mr. Quoth also sells some new weapons.

Once the team is ready to go proceed to your final mission.

Next Part: The Hunt Begins