1) The first secret chest is found on the ledge next to potion 7. Inside is the Amulet of Mana Gain which restores 1 point of mana to the wearer for each monster killed when the wearer is not the active character.

2) The second secret chest is found just under potion 18 and contains the Mana Vial which automatically restores 30% of mana when it is used up. It gets reloaded every time you pass a checkpoint. 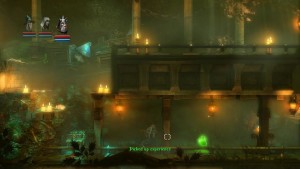 Walk straight to the right and continue down the steps. 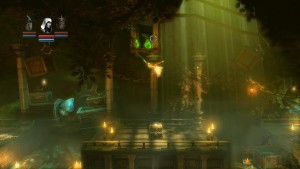 On a platform above potion 1 is potion 2 and 3. Use the thief to grapple up there and swing onto the platform. 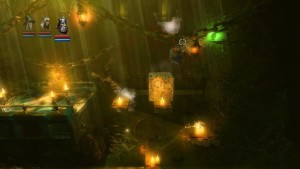 To the right of the two fireball throwers. Use the wizard to make a box or two to help you jump up to it. 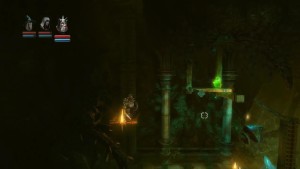 After heading down the grate in the floor the potion is on a plank to the right. The wizard can easily flip this plank over to drop the potion to the ground. 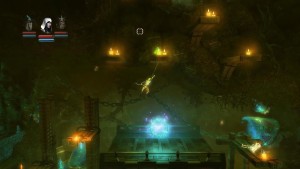 The next experience potion is directly above the next checkpoint. Use the thief to grapple up and grab it. 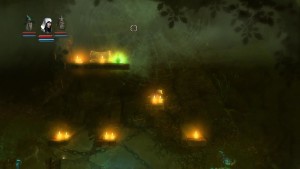 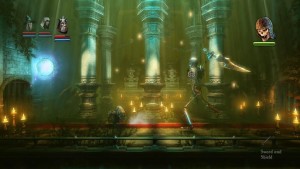 In the next room is the Skeleton Boss! You can only hurt him by hitting him in the head. The skeleton will crouch low to attack so block first and then counter strike while the head of the skeleton is still low enough to hit. 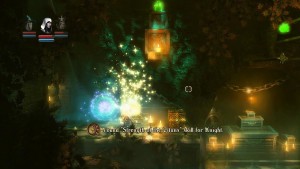 In the next room is the Strength of the Titans skill for the knight which allows him to use the shield to pick up and throw objects. The potion is on a couple of crates on a ledge. Use the wizard to bring them down. 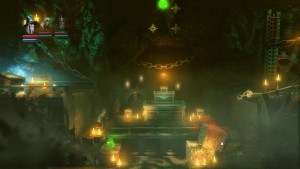 Potion 9 is directly below the ledge to the right. 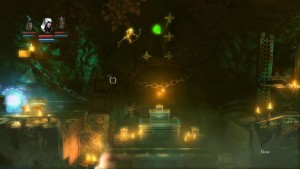 This potion is hard to get to in single-player. Use the wizard to make a tower of boxes and then jump up to the potion. 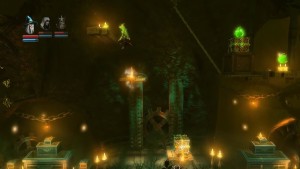 The next to platforms are connected together. When one goes up the other goes down. Stand on the first one and use a box or the wizard to lower the other one. Jump across to potion 11. 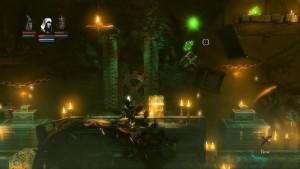 On a box held in place by a rope. Use the thief to cut the rope and the potion will drop to the ground. 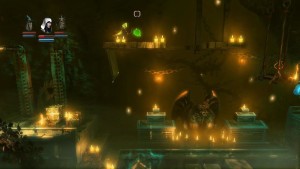 On a platform to the right of potion 12. 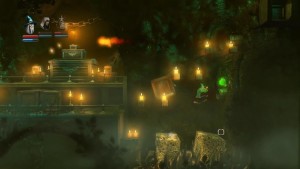 Use the wizard to draw some boxed over the spikes and jump up to grab the potion. Watch out for the fireballs! 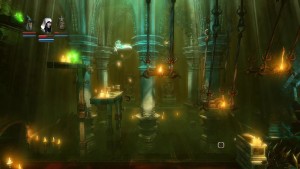 In the room with lots of skeletons on one of the platforms. 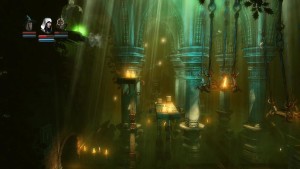 To the platform on the top left of potion 15. Use the thief to grapple up and swing onto the ledge with the potion. 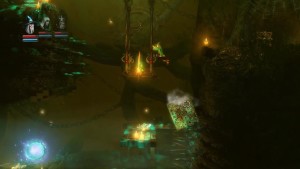 On a ledge just after the checkpoint. 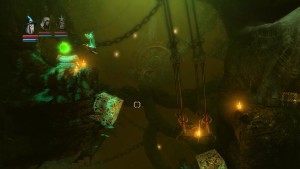 On a ledge to the left of potion 17. Impale a box on the spikes to the left so you can jump on it and up onto the ledge. The second secret chest is also here. 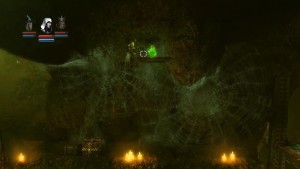 On a ledge near the spider webs. Use the thief to dangle underneath and then swing up onto the ledge. 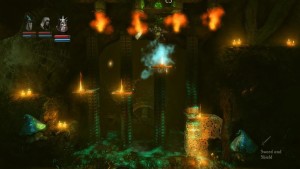 The last potion of the level and a tricky one to grab. Use the wizard to set up the 3rd and 4th platforms so the 3rd platform is high enough for the knight to swipe at the wooden platforms which holds the potion. I found it easiest to put boxes under the fourth platform and weigh it down to lift up the third platform and get it to the right height.

Congratulations, you’ve just completed the Wolvercote Catacombs! Continue on to Trine level 4 which is called the Dragon Graveyard.