The Forsaken Dungeons is the 7th level of Trine: Enchanted Edition and has some very tricky potions and secret locations. There’s also a boss fight with a giant skeleton. In total you can find 30 experience potions on this level and gain 20 experience from fighting skeletons.

1) The first secret chest is found in the room with potions 19, 20 and 21. You’ll need to smash through the wall with the rock first to get to it. Inside this chest is the Enchanted Health Crystal.

2) The second secret chest is found after the skeleton boss fight. Walk into the next room and stay on ground level for as far as you can. Jump to the left when you hit the wall and you’ll enter into a secret chamber with many fireballs. See red arrow in picture below. 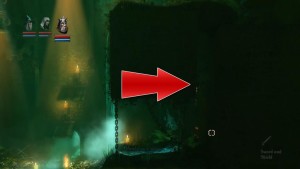 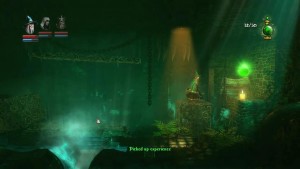 Inside the chest you’ll find some boots that reduce damage from spikes and other hazards on the ground. 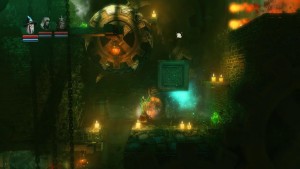 Climb up the stairs, break the boards with a fire arrow and the potion is to the right of the box next to the boards you break. 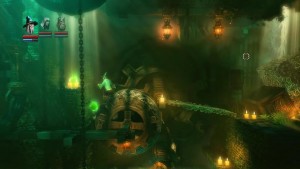 Now hook onto the spinning wheel and let it drag you to potion 2 which is on the left of it. Put a box in the path of the fireballs to make the way a little bit safer. 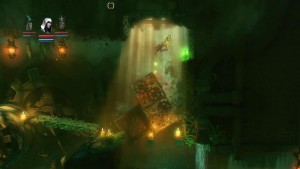 In the same room on a ledge to the far right. 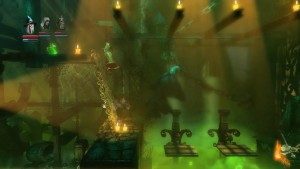 After the first checkpoint on a ledge to the left of an acid pool with two flip boards. 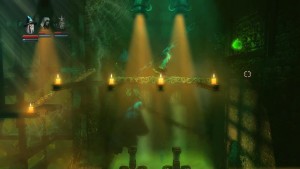 Jump across the beams or use the wizard’s planks to get to potion 6. 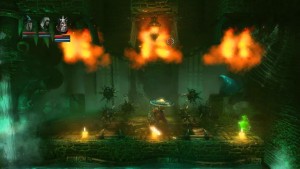 In the next room with the fireballs and spiky balls. If you don’t grab it right away the spikes will push it into the water. 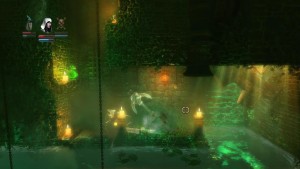 Once you get out of the water, kill a skeleton and pull the lever the potion will be on a ledge to the left. 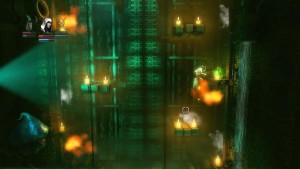 Use you jump up the platforms and avoid the fireballs look to the right for a potion about half way up. 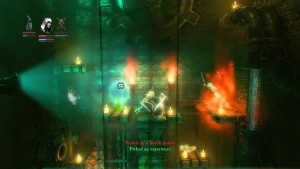 At the top of the room right in front of the checkpoint. A skeleton or two will spawn here so be careful. 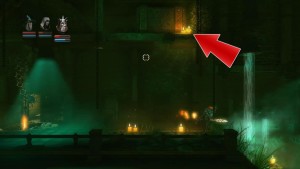 This potion is difficult to spot. It’s in an alcove above the hallway. Use the wizard to move the large stone to the right and then climb in through the small hole to grab it. 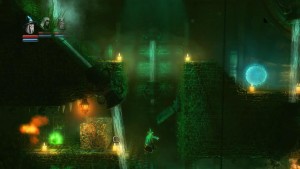 After grabbing potion 11 and before the next checkpoint drop down and head to the left. Use the knight to block the fireballs. 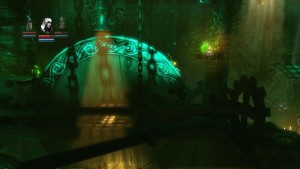 Ride the spinning wheel up and jump to the ledge on the right. 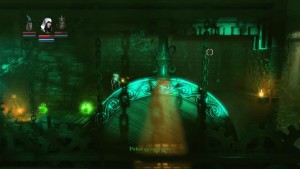 Continue going with the wheel for the left for potions 14 and 15. 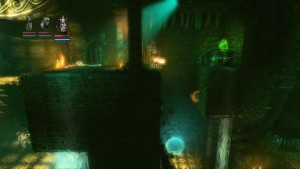 On a ledge in the next room just after the drop. There are spikes above so use the wizard to plank across. 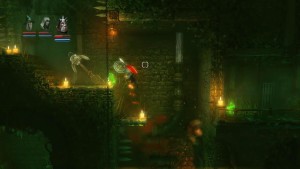 Climb the platforms and avoid the fireballs. You’ll be rewarded with the potion once you reach the top. 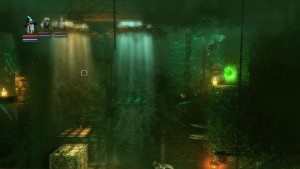 Pull the lever then continue jumping up the platforms. You’ll have to time it just right or use boxes to get up the top right where the potion is. 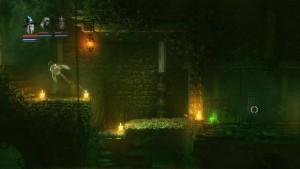 Use the rock fist to smash through the wall to the right of the lever. 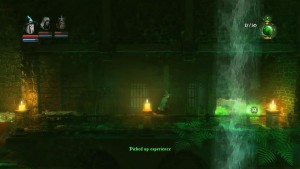 Keep walking to the right for the next two potions and the secret chest. 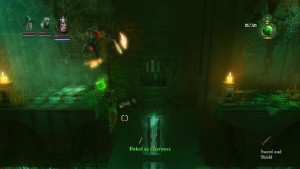 Run to the left past the swinging spiked balls and jump of the gap. 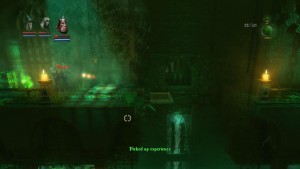 A little further to the left from potion 22. 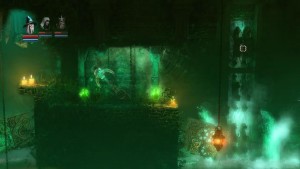 Dive into the water, swim around to the left and then use planks or boxes to jump up to the platform with the lever.

25) Same location as the previous potion. 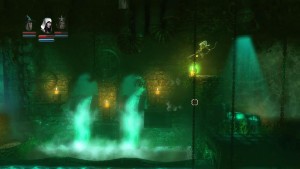 Jump across the flipping platforms onto potion 26. 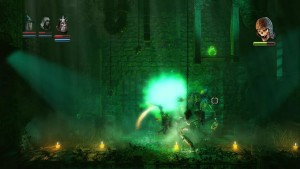 The next room will have a big boss fight. This time it’s a very large skeleton with a huge sword. You need to hit him in the head to do any damage. Block with the knight and then jump and attack to kill him.

27) Just above the big skeleton. Use fire arrows or the knight to break the boards. 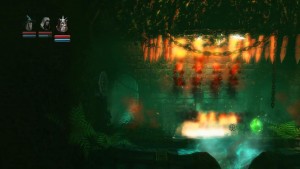 After defeating the skeleton run as far as you can to the right on ground level until you hit a wall. There’s actually a secret chamber here. Jump up and to the right to enter it. Dodge or block the fireballs and grab the potions. The second secret chest is here also.

Same room as potion 28 and next to secret chest number 2. 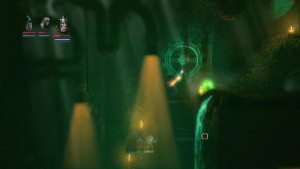 On the stairs a few rooms before the end of the level.

If you managed to find all of those potions and secret chests you’re doing very well. Continue on to the Throne of the Lost King.