By the Gods – Stringing Sods 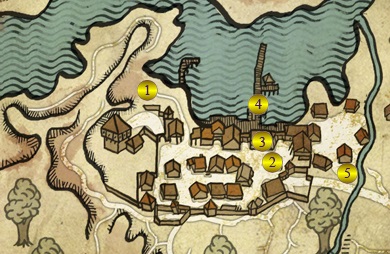 Once you finish the A Rough Landing quest and enter Flotsam one of the guards (#1) will mention that a Dwarf and bard are about to be executed. If you’ve played The Witcher then you’ll realise it’s probably your good friends Zoltan and Dandelion!

Make your way through the town of Flotsam to the Gallows (#2) on the eastern edge. There’s a crowd gathered to witness the hanging of a few “criminals”, including Zoltan and Dandelion. You’ll learn that Dandelion is accused of debauchery and Zoltan of colluding with the Scoia’tael.

There are two ways to free your friends. You could stir up the mob or get up onto the gallows and fist fight the guards. Either way you’ll have to win at least one fist fight using QTEs (Qucik Time Events). Once you defeat the first guard the executioner will hang the first prisoner, an elven woman.

Fight with the executioner next and then the town boss, Loredo, will show up. He’ll agree to release your two friends under the condition that they don’t leave the town. He asks you to meet him at his estate after dark. This is covered in the quest Indecent Proposal.

Once you’ve freed your friends head over to the Tavern (#3) and have a few drinks with them while you chat with them and find out what’s happened to them over the last couple of months. Take note of the noticeboard outside the tavern. You can look at that later to pick up a few extra quests.

Once you finish talking to your friends this quest will be complete and you’ll gain 300 experience points.

Someone will run in and shout the alarm that the beast is attacking. You’ll run out to the docks (#4) to take a look. This starts the main quest, The Kayran. You’ll meet another sorceress, Sile de Tansarville and make preparations to defeat the monster together.

The local peasants will be unhappy about their friend being injured by the Kayran but you can intimidate them or use the Axii sign to get rid of them.

After finished the conversation with Sile the next logical step is to visit Cedric (#5) as this will open up a few more quests and give you a chance to speak with Triss again as she’ll teleport in to join in the conversation.