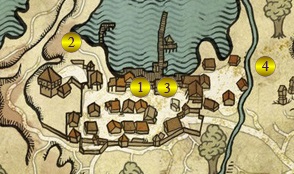 The Hung Over quest becomes available after you speak with Cedric about the Kayran. The Blue Stripes Lodge (#1) is in the building next to the Inn (#3). Enter the Lodge to see Roche and the Blue Stripes soldiers having some fun. This quest is initiated once you speak with either Fenn, Thirteen or Ves.

Geralt will have a few drinks with them and you’ll all decide to play some games. The first game is a knife-throwing contest with Ves. You need to aim with your mouse and wait for one of the soldiers to call out the target, either the oar, ham or the map. Press ‘R’ to throw the dagger when you have it lined up. If you manage to beat Ves you’ll acquire a new skill, Thrower, which increases damage when throwing daggers by 5.

After the game some peasants will arrive and get into an argument with Roche. You can either try to calm him down or let him lose his temper and the quest will be failed. To calm Roche down either Persuade him or have a fist fight with him if persuasion fails.

After Roche is calm again you’ll have a round of Arm Wrestling with Thirteen and then Fenn. If you defeat both of them you’ll get the Sword of Creyden as a reward.

After more drinking you’ll pass out and eventually wake up on the shore (#2) just out of town, with all of your gear missing. Speak with the nearby townswoman and bribe her to tell you what happened. She tells you to speak with Margot at the lower level of the Inn (#3).

Margot recounts the story of how you and the two other ‘boys’ came crawling into the tavern looking for girls. Ves tried to stop you but couldn’t. You might also notice that Geralt has a new tattoo on his neck!

Make your way back to the Lodge (#1) and speak with Ves. She confirms the story and has placed your items in a Chest.

If you want the tattoo removed speak with Triss. Once she stops laughing she’ll tell you that you need Green Mold, Wolf’s Aloe and White Myrtle Petals. These can all be purchased from Anezka (#4). Once you have the items return to Triss and she’ll remove the tattoo.