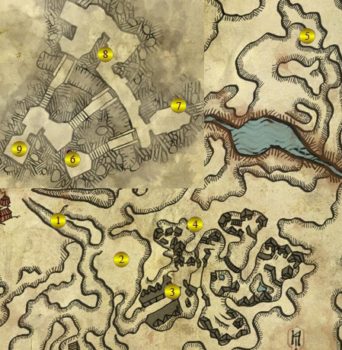 This quest is initiated once you speak with Dethmold and are ready to head out through the Mist (1). You’ll need to cross over to Vergen to find the artifact with the essence of death. This quest runs parallel with The Blood Curse so many of the steps will be similar.

Make your way to the Mist Entrance (1) where you’ll also run into Zoltan. He’s not having a good time on this side of this mist so wants to go with you to Vergen. You’ll be able to cross through the mist with the help of De Tansarville’s Amulet. If you get lost use your medallion and it will show the way. Don’t worry about fighting any of the spectres, just make a run for it to the other side.

Once you get there you’ll meet some of the Scoia’tael (2). They won’t attack but aren’t happy to chat either. Make your way with Zoltan to the Gates of Vergen (3). There’s not much to do in Vergen because most of the city will be blocked off. You will meet Skalen Burdon and Yarpen Zigrin who’ll give you more information about the symbols and the Dun Banner’s Standard.

When you’re ready make your way out of the city through the Tunnel Exit (4) and head towards the Dwarven Catacombs (5).

Inside the catacombs, you enter at #6, there’s a few items to find. If you examine the corpses you’re likely to awaken Wraiths but there is a sword called Fate at #7 and Investigator’s Notes (8) that you can find along the way. Some of the walls are breakable so you’ll need to use the Aard sign to reach all of the areas.

Eventually you want to make your way to the room at #9 where you’ll meet Ekhart’s Ghost. He was the Standard Bearer of the Dun Banner. You can either fight him or try to convince him that you were a part of the Dun Banner by answering his questions.

The answers to the questions are: