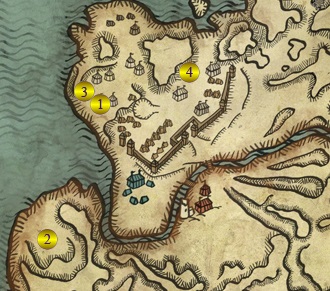 This quest is initiated when you speak to Zyvik and ask him about magical artifacts. He tells you that King Henselt has a medallion which he took from a priest during the Battle of Brenna.

Speak with Dethmold (1) about the medallion. He’ll tell you that the king won’t part with it unless you’re able to lift the curse. This means finishing The Blood Curse quest before you can come back for the medallion. That quest will be completed at Sabrina’s Pyre (2). Once that’s done the king will invite you back for a drink at his Tent (3).

While chatting with the king an Assassin will enter and attempt to kill the king. Geralt will use the Aard sign to push the assassin out of the tent. When you run out of the tent you’ll be confronted by 2 assassins. Use Yrden to trap one of them while you deal with the other. This is a tough fight on the harder difficulties. Once you’ve done enough damage Geralt will kill one of them and the other will run off.

Meet Dethmold at the Medical Tent (4) to figure out how to find the assassin who escaped. This is detailed in The Assassins of Kings quest. Once that’s completed return to Dethmold for 1,500 experience points and the Medallion. Completing this quest will lead onto The Eternal Battle.