The Path to Visionary 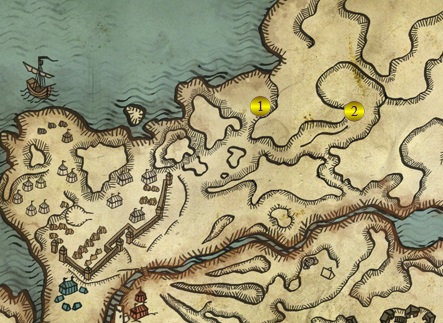 You’ll receive this quest while on your way to the Visionary during The Blood Curse quest. You’ll need to see the Visionary to get information on Sabrina’s Pyre and to find out how to lift the curse.

On the way to the Visionary you’ll run into a group of soldiers in a fight. Help them out and they’ll give you some money that they were supposed to give to the Visionary but they’re too scared to continue.

Once you reach the Visionary’s Hut (1) you’ll be attacked by a group of Harpies. You can either kill them, which shouldn’t be too hard by now, or run into the circle of candles which forms a protective shield from the Harpies.

Head over to the shrine, drink the potion and meditate until night time, after 20:00. Then perform the ritual. You’ll have a very strange vision with a giant chicken and large mushrooms. When you approach the chicken you’ll reappear on top of the nearby hill. Turn around and pick up the Visionary Notes I and then head back to the Visionary.

When the Visionary asks you questions about the vision tell him what you really saw. You’ll find out that he was the soldier that thrust the spear into Sabrina. He had difficulty killing her and she cast the curse while he fumbled about. He also tells you that the Relic Pedler has the spearhead.

Once you’ve seen the Visionary you can continue with The Blood Curse quest.