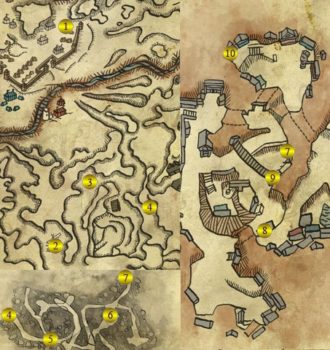 The Siege of Vergen is the last quest for Chapter 2 and begins once you complete Conspiracy Theory. Roche will fly into a rage after hearing that Ves was raped by the King and starts killing as many Kaedweni soldiers as he can. Roche and Geralt decide to try and stop the siege on Vergen and devise a plan to enter Vergen through the underground tunnels.

You begin in the Cantina (1) and need to make your way with Roche to the Tunnels (4) under Vergen. Be prepared to fend off groups of Kaedweni soldiers along the way. As you approach the tunnels you meet a Female Troll (2). She’s friendly if you stop to ask her for information. She says that she saw Letho and also Sile heading towards Vergen.

In this area is another Shipwreck. You can search it for the Journal of Eyla Tarn. This completes the Mystic River quest.

Continue on your way towards the tunnels and you’ll run into a Male Troll (3) fighting a group of Kaedweni soldiers. Help him out with the battle. If he didn’t kill his partner you can tell him that she will be fine as long as she doesn’t run into any soldiers. He’ll run towards the gate and distract the soldiers.

Make your way to the Tunnel Entrance (4). It may be dark inside so make sure you have a Cat Potion on hand. Along the way you’ll run into Adam Pangratt (5) and his mercenaries. He’ll run off but leave his men to take care of you. Defeat them and make your way through the twisting tunnels to Dethmold, Pangratt and a band of mercenaries (6).

Dethmold has a few spells at his disposal, lightning strike and protective shield. Once you take him down to about 20% of his health he’ll teleport away and watch the rest of the battle from a distance. Dispatch of the remaining men. At the end of the battle you can either kill Adam Pangratt or let him live. He’ll give you his sword called Nevde Seidhe, if you let him live or you can loot it from his body if you kill him. At the end of the fight Dethmold will teleport away.

After the battle the barrier into Vergen will dissipate and you can make your way towards the Tunnel Exit (7) to Vergen.

Once you come up from the tunnels you’ll run into Zoltan. At first he thinks you’re an enemy and charges to attack. Once he realizes it’s you he’ll tell you where Sile is staying. If you want you can go and help Iorveth in the Town Hall (8) first. Once that’s done head over the Rope Bridge (9) and enter Philippa’s House (10). Just as you enter Sile teleports away to Loc Muinne.

King Henselt enters the house with his personal guard. After a few nasty words two of his soldiers, the ones with two-handed swords, attack. Once you’ve killed them Henselt himself will attack with his two shield-bearers. Use Quen and Yrden if you’re having trouble with this fight, or Igni if you’ve buffed this spell when levelling up.

Henselt will be injured but not killed. Roche enters the house and will want to execute the king on the spot. You can let him kill him or intervene. This doesn’t make much of a difference to the story either way as Dethmold will be leading the Kaedweni forces in chapter 3.

After the cut-scene you and Roche will travel to Loc Muinne for Chapter 3.