Bring it On: Kaedweni Camp 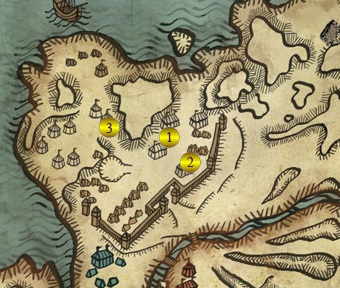 While touring the camp with Zyvik in Prelude to War: Kaedwen you’ll be given this quest. Back in Flotsam Bartholomey Bargee mentioned that one of the strongest men he’d ever met was Adam Pangratt. You’ll face him once you’ve beaten the other soldiers in the camp.

First head to the Campfire (#1) to challenge both Martin and Randal. You’ll also need to defeat Magnus who is most likely standing around by the Smithy (#2).

Once you’ve defeated the first three contenders head to Adam Pangratt (#3) in the upper camp. This arm wrestle is much more difficult but if you win you’ll be rewarded with up to 100 Orens.