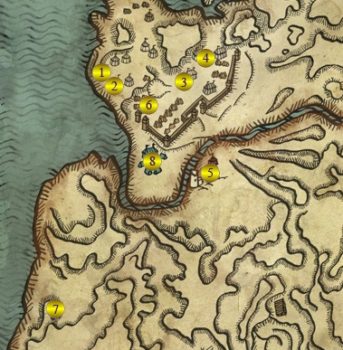 Once you finish your conversation with King Henselt (1) in Prelude to War: Kaedwen you’ll be called to Dethmold’s Tent (2). He tells you about a conspiracy against the king and he wants you to find out all you can about it. You’ll need to question the soldiers in the camp to gather more information.

There’s a number of Drunken Soldiers (3) in the camp, all searching for Odrin. He was one of their drinking buddies and he’s wandered off. You can find Odrin outside the western gates of the camp. Odrin tells you that Vinson Traut is involved in the conspiracy and tells you to visit the Brothel Camp (5), use a square coin for payment and ask for Whistling Wendy. You’ll need to tell her the password to be let in to the secret underground base.

Alternatively you can speak with the father and son outside of the Cantina (4). This begins a quest called The Butcher of Cidaris. Once you’ve completed that quest ask him about conspirators and he’ll give you the same information as Odrin.

The fight with Vinson Traut is incredibly difficult by yourself. To make it easier run back to Dethmold (2) and give him the information. He’ll agree to send along some soldiers to help you take down Vinson Traut and his goons.

Head back to the brothel camp and drop down the trapdoor. When you go through the next door the fight will begin. If you spoke with Dethmold four soldiers will enter through the other doors and help you defeat the conspirators.

Once the battle is over loot Vinson’s corpse to find Seltkirk’s Armor. This is one of the items for the quest Courage Symbolized. You’ll also find a pamphlet written by Dandelion proving that he’s in support of the conspiracy. You can speak with Dandelion (6) about it but he won’t have much to say.

Once this part of the quest is over head back to Dethmold (2) for your reward of 300 Orens, or you can refuse payment if you want.

This quest is still not completed and you’ll need to wait until you’ve finished The Blood Curse, The Assassins of Kings and The Eternal Battle to continue with it.

You’ll wake up in the brothel’s camp with Dandelion by your side. He tells you that the real conspiracy boss is having a meeting in the Hut on the Cliff (7). When you head over there you’ll find out that Roche is the real boss of the conspirators. You’ll tell him that one of the conspirators, Kirim, has been captured and that he’ll likely tell Henselt about Roche.

Quickly run back to the Blue Stripe’s Camp (8) to warn the others. When you get there you realize it’s too late. The Blue Stipes, including Ves, were invited to a “banquet” to celebrate the win over the conspirators. When you make your way to the Cantina (4) you’ll discover that all of the Blue Stripes have been hanged, except Ves.

Roche will go on a rampage, killing as many soldiers as he can. This ends the Conspiracy Theory quest and begins The Siege of Vergen.