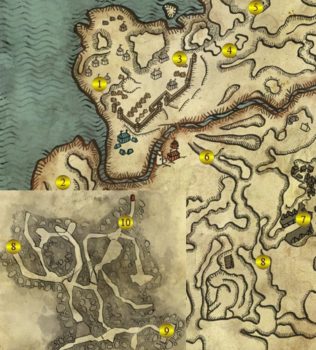 King Henselt’s previous advisor, Sabrina Glevissig, cast a meteor storm on the battlefield, killing enemy and friendly soldiers alike. Henselt sentenced her to death and with her dying breath she cursed the king. Most of chapter 2 will be devoted to lifting the curse.

The King and his new advisor, Dethmold (1), will give you plenty of information about the curse. You’ll need to know about the circumstances of her death and the words she uttered to cast the curse.

You’ll need to investigate the place she was killed, Sabrina’s Pyre (2). While there you’ll run into 2 soldiers that need help getting back to the camp. This is explained in Lost Lambs. Have a look around at the various items, the pedestal, the soil, wheel and other items.

One of the items you find will be a Square Coin. This is used for part of the Conspiracy Theory quest. You’ll also find a Letter and a Nail that you can take from the wheel of the pyre.

Looking at the soil around the pyre shows one set of footprints. Only one person approach Sabrina, the one who killed her as she was casting the curse.

The only way to lift the curse is to recreate the events surrounding the curse and kill Sabrina before she finishes casting the spell.

Speak to the Relic Pedler in the Cantina (3) to learn some more information about the curse. It’s not essential but will provide more background information. He also talks about Yahon’s Spear which is another item you’ll need to lift the blood curse. The Pedler will give you details about a Visionary (5) in the ravines so you should go and speak with him.

On your way to the Visionary you’ll come across a few Soldiers (4) in battle with Rotfiends. Help them out and you’ll start the quest The Path to the Visionary. When you’ve finished this quest head back to the Relic Pedler (3). He was lying about the spear and actually had it in his posession although he sold it to someone else a while ago. If you Persuade him or use Axii he’ll tell you that he sold the spear to Iorveth who probably still has it.

To get to Iorveth you’ll need to cross to the other side of the mist but you can’t do it without some protection. Head back to Dethmold (1) and he’ll give you an Amulet to guide you across the mist. Make sure to also pick up his Grimoire, Magic Dust, the Emissary’s Flag and a piece of armor, Zireael’s Armor. Speaking with him also initiates the Death Symbolized and Hatred Symbolized quests.

Make your way to the Mist Entrance (6) and along the way you’ll bump into Zoltan who wants to cross over to Vergen. Agree to help him across the mist. If you get lost use your Medallion to find out which way to go.

After meeting the elves on the other side make your way to the Gates of Vergen (7). Two old friends, Yarpen Zigrin and Skalen Burdon will meet you at the gates. You’ll find out more about the Dun Banner Standard for Death Symbolized and that Saskia has Vandergrift’s Sword for Hatred Symbolized.

Zoltan will agree to handle asking Saskia for the sword while you go off searching for the Dun Banner Standard. This is detailed in Death Symbolized. Once you have the standard make your way to the Tunnel Entrance (8).

The tunnels are fairly confusing with some passages seeming to pass above or under others. Before meeting Zoltan head towards the Blood Sword (9) which is guarded by a Bullvore. It’s the best Silver Sword in chapter 2. Once you have it make your way to Zoltan (10) who’s waiting for you behind another Bullvore.

Zoltan wasn’t able to convince Saskia to give him the sword but he has brought Saskia along. After speaking with her she’ll agree to give you Vandergrift’s Sword in order to lift the mist. Saskia will also tell you that Iorveth lost the spear in a dice poker match with Skalen. This begins the quest The Spear of Destiny.

Before leaving the mist go back to Skalen and play him at dice poker until you whin the Spearhead. That’s all you need to do here so head back across the mist. As you come out on the other side you’ll run into Roche and a few of his men. He tells you that the Nilfgaardians attacked and that they too possession of a Figurine. The figurine is actually Triss who’s been turned into an artifact by a spell called Artifact Compression.

Make your way back to King Henselt and tell him that you’re ready to lift the curse. The two of you will travel over to Sabrina’s Pyre (2). You’ll stand on a hill overlooking the pyre while the King performs the ritual down below. You’ll need to guide him as he makes a trail with the powder. It needs to follow the path shown by the symbol in the Grimoire.

If you can’t figure it out you can use trial and error as the ritual will begin again if you get it wrong. The path the king needs to take, starting from the pixie ring, is to the petrified bread, black candles, goat’s skull, scorched tree, raven’s corpse, sour milk and then back to the pixie ring.

Once the symbol has been created go down to the pyre and use Igni to inflame the symbol and start the ritual. As the King waits to thrust the spear you’ll need to fight off a dozen or so Wraiths. Ranged weapons and spells seem to work well here. Eventually the ritual will be complete and the curse lifted. Henselt will call you back to his tent and you can continue with your other quests.