Beyond Hill and Dale…

It appears Syanna has entered into a childhood fable book so Geralt will use the book to enter into the illusion. You’ll be taken to the Land of a Thousand Fables. The magic is so strong here that you won’t be able to access your maps. The orange map markers should still point you in the right direction. 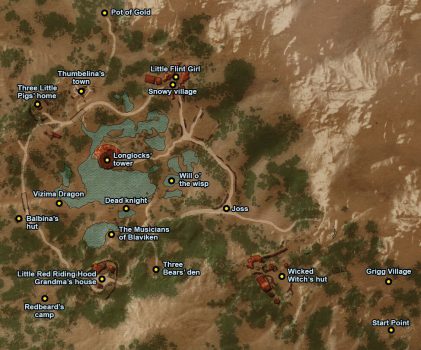 From the starting point make your way to the west. Kill the Archespore, head over the bridge and approach the hut. Syanna is trying to plead with the witch to let someone out of the hearth. Once you approach the witch will attack. 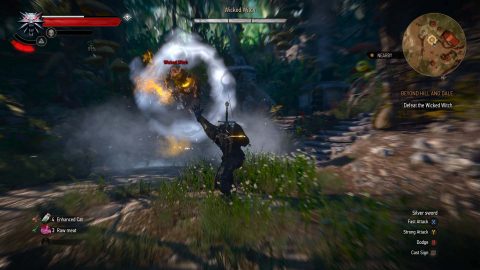 The Wicked Witch has a broom that lets her fly. She’ll try to pour toxic soup on you from above while staying protected in her magic bubble. You’ll need to wait for the witch to start her attack with the soup. The bubble will dissipate briefly, giving you a chance to knock her down with Aard or a crossbow bolt.

Once she’s been knocked to the ground you can attack her in the usual way for a few seconds. Coating your silver sword with Relict Oil will increase your attack damage. You may want to attack her broom first of all to stop her from flying.

Once she’s on the ground throwing a Dimeritium bomb at her will make her drop her cauldron and turn her basically into a fast moving Water Hag.

Once the witch is dead Syanna will find the key and unlock the hearth freeing Jack. She asks him about some beans but he doesn’t know and tells her to talk to Joss.

Talk to Syanny to find out what’s going on and learn about the beans. Three magical beans are needed to escape the illusion. They’ll take you up to a giant’s castle where you can find another exit out of this realm.

From the witch’s hut head out the other gate and you’ll be attacked by Pixies. Take them out and you’ll find Unicorns. Ride them to the west and you’ll find Joss. He’s the boy who cried wolf. Everything he says is a lie but if you question him carefully you’ll find out everything you need to know.

Make your way to the Snowy Village to the north and speak to the Little Flint Girl. She’s wearing Syanna’s Ribbon and you definitely want it back if you want to see the good ending. Either play a game of Gwent with her and win or pay 500 Crowns for the Ribbon.

From the Snowy Village make your way to the west and you’ll see the only remaining house, the Brick House. Blow it down with Aard and the 3 Little Pigs will attack. Once you’ve killed them grab the Blue Bean from the table in the hut. 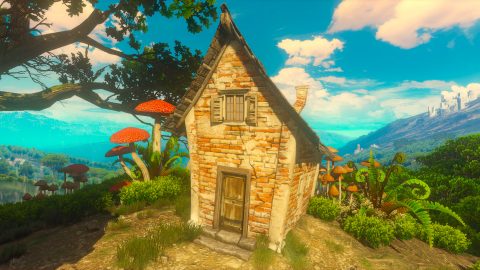 Once you have the first bean Syanna will talk to you. Make sure you ask her what happened so you can hear her side of the story. This leads to the good ending.

Follow the path to the south to Grandma’s House. You’ll find the Big Bad Wolf drunk on the ground. He refuses to interact with you because Little Red Riding Hood is dead. Syanna will have to act in her place but you have no red hood. 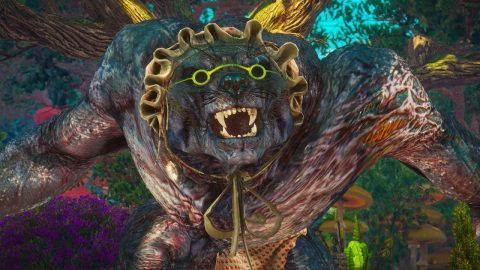 Jump into the well and grab the Red hood. You can’t go out the way you jumped down so follow the tunnel around until you can climb out of the water. Syanna will wear the hood and you’ll go off to talk to the wolf.

A fight will soon begin and you’ll have to kill the wolf. Loot the slain wolf for the Red Bean.

The Yellow Bean can be found with Longlocks at the top of the tower. It’s impossible to miss the tower so head towards it and start climbing up. 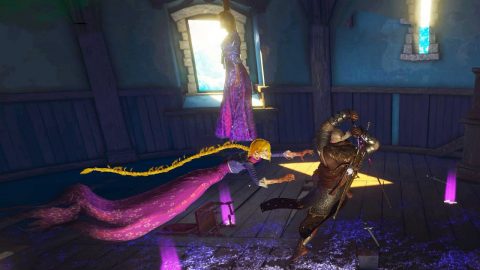 Once you reach the top you’ll face the Wraith Longlocks in battle. Once she takes damage she’ll summon other wraiths to regenerate. Kill them quickly so she doesn’t get too much health back. Once she’s been defeated grab the Yellow Bean from the pillow on the bed.

Climb out the window and jump down to the water below. Go and see Syanna as it’s time to plant the beans.

The Beanstalk and the Giant

Make your way to the small village and use your Witcher senses in the field to find the best spot to plant the beans. You’ll be attacked by Pixies as you approach the field so deal with them and then plant the beans.

After the cutscene you’ll be up in the clouds in front of a giant’s castle. Kill the Cloud Giant and loot it. You can talk to Syanna for a bit of fun if you’ve made friends with her. Otherwise just head towards the courtyard and jump down the well. You’ll emerge back in the real world with Regis waiting for you.