From the King’s Station head left and take the path leading down to the Ancient basin. This is a small area but if you want the true ending you’ll need to come back at least twice more to reach the Abyss and enter the Palace.

Drop down the abandoned shaft all the way to the bottom where you can find a Whispering Root tree behind a secret wall to the right. Head to the left and drop down under the bridge. Slide down the pillar and super dash across to find a Wanderer’s Journal. 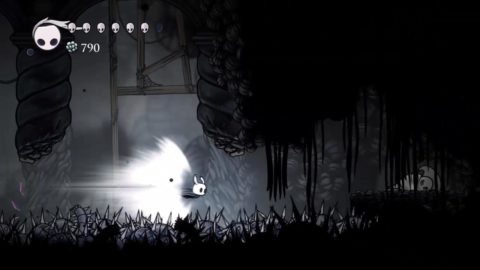 Jump across the pillars to the left and drop down the hatch to the Tram Station. There’s another hatch leading down to the underground cave system but head to the left first and drop into the small hole. There’s a new enemy here, the Lesser Mawlek, which spits infection at you and swipes at you if you get close. 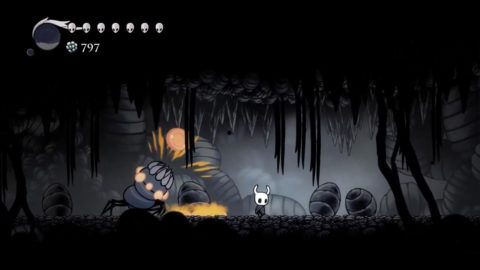 Drop down the next hole and do a Desolate Dive on the shaky ground and kill one more Lesser Mawlek to rescue the Grub. Climb back up the hole and head to the left, past a few Lesser Mawleks to find some Pale Ore. Make your way back to the tram station and drop down the hatch.

As you head down the first room on the right has a Fountain. If you drop 3,000 Geo in the Fountain you’ll receive a Vessel Fragment as a reward. Don’t worry about losing all of your Geo, the Fountain will only take 3,000 Geo no matter how much you have.

Cornifer is in the next passage down on the right. He’ll sell you a map for 112 Geo. If you continue down and to the right you can reach the Palace Grounds but only if you have the Monarch Wings. Straight down is the access to the Abyss but you won’t be able to get past the door without the King’s Brand from Kingdom’s Edge. The only way to go is to the left.

Pay the Toll Machine to make a Bench and take a rest in case things go wrong in the next boss fight. Super dash to the left. There’s a Grub in a passage above but you’ll need the Monarch Wings to reach it. Instead drop down the next passage. Work your way around, killing the Mawlurks spitting infection as you go. When you find the large worm creature go inside it’s mouth to find a Simple Key. 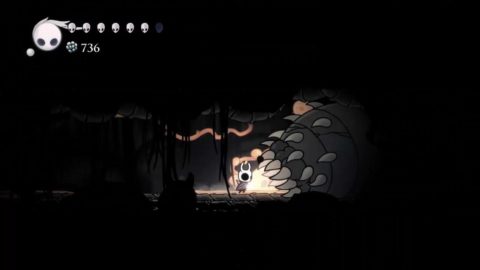 Continue around until you come back up to the main passage and then go left for the boss fight. 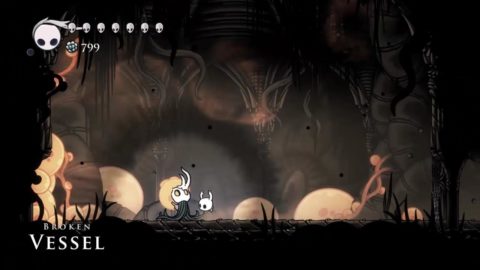 The Broken Vessel has similar moves to the Knight. It can perform a forward dash with a slash, a leap and then dash, a basic leap and a slam that explodes out blobs of infection. It can also spawn Infected Balloons and do a headbanger that throws out large amounts of infected blobs.

Once the Broken Vessel has been defeated head to the left for the Monarch Wings. This gives you the ability to flap your wings while in the air, effectively giving you a double jump. Now you can go back and explore the areas that you couldn’t reach before.

The Palace Grounds can be accessed by jumping up the passage under where you found Cornifer. You can only access the White Palace when you have the Awoken Dream Nail and use it on the corpse of the Kingsmould, the guy outside the Palace.

Getting through the White Palace will be necessary if you want to see the True Ending. For now continue to the right and break the wall for access to the Hidden Station and a Bench.

Other Areas to Explore

Now that you have both Isma’s Tear from the Royal Waterways and the Monarch Wings from the Ancient Basin here are a few areas you might want to check out before continuing to the next section.

Lake of Unn – Swim across the lake in Greenpath to meet Unn who will give you the Shape of Unn charm.

Crystal Guardian 2 – Above where you squared off against the first Crystal Guardian in Crystal Peak is another one. This one is much quicker and more difficult to beat. When you do defeat him you’ll be rewarded with a Mask Shard. There’s also a King’s Idol above where you met Cornifer in this area.

Watcher’s Spire – One of the buildings in the City of Tears. This is where you can find one of the Dreamers, Lurien, but to get to him you’ll need to defeat the elite Watcher Knights.