Temple of the Black Egg

You can enter the Temple of the Black Egg to face the Hollow Knight once you’ve defeated all three of the Dreamers but to find the True Ending there are a few additional steps you’ll need to take.

First you’ll need both parts of the Kingsoul charm. The first half can be found in the Queen’s Gardens after defeating the Traitor Lord. The second half is found in the White Palace in the Ancient Basin.

To get into the White Palace you’ll need to use the Awakened Dream Nail on the knight outside. This means collecting enough Essence to upgrade your Dream Nail at the Seer’s house in the Resting Grounds. To get the Essence you’ll have to defeat at least a few of the Dream Bosses, as well as many of the Dream Warriors.

Once you have the two pieces of the Kingsoul charm, equip it and descend once more to the bottom of the Abyss. The ground at the bottom will give way, giving you access to the Birthplace. Search around this area for an Ancient Egg and a large black egg. Use the Dream Nail on the large black egg and then climb back up the Abyss. Up the top you’ll be given the Void Heart charm. This charm takes the place of the Kingsoul and can’t be unequipped. Luckily it doesn’t use up any Notches.

Now you can enter the Temple of the Black Egg in the Forgotten Crossroads. When the Hollow Knight is almost defeated Hornet will tie up the Hollow Knight for a brief moment, giving you a chance to use your Dream Nail on him. Inside the dream you’ll face possibly the toughest boss of the game, Radiance. 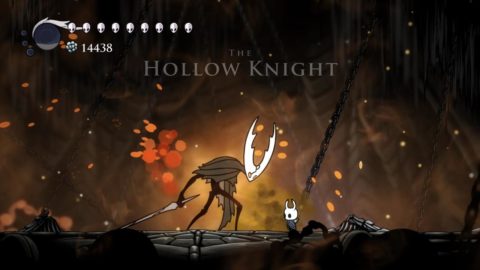 The Hollow Knight has three different attacks during the first phase and gains more for each additional phase. The first attacks are the Lunge with the nail, the Triple Slash and the Parry. He’s susceptible to attacks from above. You can also Shade Cloak dash through him as he lunges towards you.

In Phase 3 the Hollow Knight gains a few additional air attacks. One is the Blob Explosion where the Knight will hover in the air and shoot a large number of blobs down towards the arena. The second attack is the Smash. The knight will leap up into the air and smash down towards you. It can be difficult to avoid this attack. The Knight will Smash from 2 to 5 times before stopping.

If you want to proceed to the Radiance fight use the Dream Nail when Hornet holds the Hollow Knight down. If you continue to attack the Knight then Hornet will be thrown to the ground and you’ll have to finish him off.

Some charms that help with this battle are Quick Slash, Mark of Pride or Longnail, Sharp Shadow and Unbreakable Strength. The Lifeblood charms and Joni’s Blessing are useful if you’re not getting a chance to heal but you’ll have to sacrifice one of your other charms. 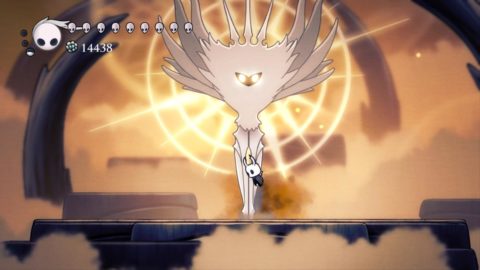 Radiance has 1700 health and will be fought over 5 phases, if you make it that far. She does 2 damage with each of her attacks and all of her attacks have a random element to them, making them that much harder to dodge.

Charms: There are a few different strategies that seem to work for different people. If you’re finding that you have no time to heal and the double damage is killing you swiftly then try the Lifeblooc Heart, Lifeblood Core and Joni’s Blessing Combo. This should give you 19 health, meaning you’ll survive 9 attacks from Radiance and be killed on the 10th.

Another option is to focus primarily on the Abyss Shriek spell. You’ll want to conserve Soul for the Radiance fight. You should be able to get in two quick Abyss Shrieks before Radiance begins to move. Using the Shaman Stone will increase the damage of the Abyss Shriek from 80 to 120. You may want to use the Soul catcher and Grubsong charms to increase your Soul generation.

Phase 1: For the first phase Radiance is teleporting around the arena while the attacks come at you from all directions. The first attack is the Fireball attack where 3 fireballs appear randomly around the arena one after the other. They’ll follow you for a few seconds or until they hit a solid object. The second attack is the Sword Wave, from one side of the screen or the other. There will be a gap randomly in the swords for you to dash through. The Swords can also come from the top of the screen and shoot downwards. You’ll need to dodge side to side for this one. The other attack is the Wide Laser that will move from one side of the screen to the other. Sometimes it stops in the middle and starts again from the other side. The only way to avoid this is to Shade Dash through it.

Radiance also has some attacks that come from her body. She has the Sword Clock where the swords form a circle around her and then shoot outwards. Her other attack is the Light Beam attack where beams of light shoot out from her. She’ll do this three times in a row.

Phase 2: The second phase attacks are exactly the same as the first with the addition of spikes form on one side or other of the platform you’re standing on. You’ll be given a few seconds warning as the spikes will shine as they begin to form.

Phase 3: For Phase 3 spikes will form on the left edge and the right edge of the platform. Radiance will stay still in the center. The only attack will be from Swords dropping down from above. This is a good time to conserve your Soul and jump up to hit Radiance with the Nail.

Phase 4: This phase is by far the most difficult phase to get through. All of the attacks are the same as phase 1 and 2 but you’ll need to jump from platform to platform. If you’ve saved up Soul from the previous phase you should have a few Abyss Shrieks ready. Focus on dodging the attacks first and only attack Radiance when she’s in a good position.

Phase 5: For the last phase there is only one single attack. A Light Beam that Radiance will shoot down towards you. You’ll need to dodge it as you make your way up the platforms towards her. Once you reach her all you need to do is hit her once with the Nail to complete the game.

Strategy: Phase 1 should give you an opportunity to see all of the attacks and learn how to dodge them. Save some soul for Phase 2. You’ll want Phase 2 over pretty quickly as the spikes on the ground combined with multiple attacks can make life difficult. Use a few Abyss Shrieks to quickly move to the next phase. Phase 3 is about conserving Soul. Only use your Nail on Radiance while you dodge the Swords and jump up to hit her. Once again for Phase 4 you’ll want it over as quickly as possible. Use Abyss Shriek whenever Radiance appears above you. Don’t try to go to far to reach her if she teleports away. Just dodge the attacks and wait for a good opportunity. During the last phase time the Laser Beams so that they will target the previous platform as you jump to the next one.

With a little bit of skill and a lot of luck you may be able to defeat the final boss of Hollow Knight for the True Ending. If you’ve made it this far congratulations! You may also like to try Ori and the Blind Forest.