Only the western half of the City of Tears will be accessible until you find another entrance through a different area to the eastern side of the city. The path directly to the map maker is also blocked off so you’ll need to make a loop around to find him.

From the entrance make your way to the right and drop down to find the first Bench. Continue down to the bottom of the city. Head all the way to the left until you find the Nailsmith in his little hut. He will upgrade the strength of your nail. The first time he will only ask for Geo. The next upgrades will cost you Geo as well as Pale Ore. Each upgrade adds 4 damage to your attack. The basic Nail does 5 damage so after the first upgrade the Nail will hit for 9 damage. There are 4 upgrades in all, Sharpened Nail, Channelled Nail, Coiled Nail and Pure Nail.

The building to the right is closed off from here so head back to the left. Go up the second lift and take a jump and a dash to the ledge on the left about half-way up. 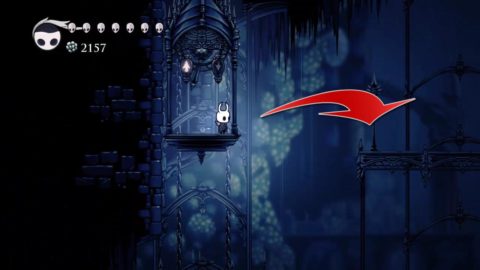 Make your way up the building. About half way up you’ll find a Rancid Egg. Towards the top right is another captured Grub. 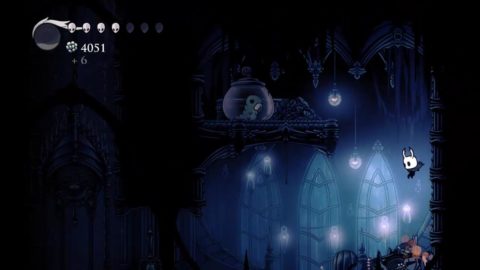 Make your way to the top of the building and follow the pages to the exit at the top left. Head to the right to find a Bench and the Map Maker.

From here head across to the left to find Zote the Mighty. He doesn’t need to be rescued this time but does complain about the rain.

Make your way up the platforms to the exit at the top right. Jump across the roof to another Bench and the Stag Station for this area. Kill the Bugs on the left to find a Wanderer’s Journal. Continue to the left to unlock the Lift back to the Forgotten Crossroads.

Make your way to the left and drop down the spiked passage. Head around to the left to find a Mask Shard.  If you want to head all the way to the right to meet Salubra for extra Notches or Charms then now would be a good time to do it. Make your way back to the lift and head to the City of Tears.

Make your way back towards the map maker, head down just before you reach him and take the exit to the right. You’ll get trapped in a chamber with a Soul Twister. This creature will teleport around and shoot fireballs at you. Try to use the ledges to block the fireballs and jump up to hit it when it’s near enough. Once it’s been killed the gates will open. Take the exit above.

The path to the left leads to a locked door. You’ll need the Elegant Key to open it which you can get from the shopkeeper in Dirtmouth once you give him the Shopkeeper’s Key which you can find in Crystal Peak. Inside is the upgraded spell for Vigilant Spirit which is called Shade Soul.

Make your way up through the building. You’ll have to deal with more Soul Twisters along the way. once you reach the top you’ll have a mini boss fight with a Soul Warrior. 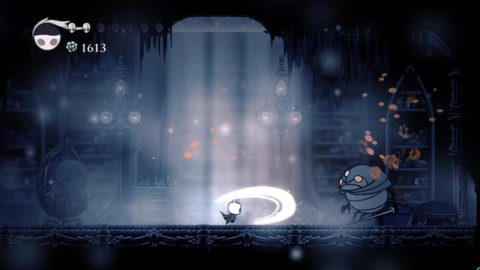 He has a few attacks which are all fairly easy to spot, a teleport, forward dash, downward smash and fireballs. Once he’s been killed you can continue to the right.

Make your way downwards first to open up the shortcut and then head back up to the top of the building. As you make your way towards the boss arena just before the exit to the left jump up for a secret.  Run along all the way to the right for the Spell Twister charm. Now head back for the boss fight. 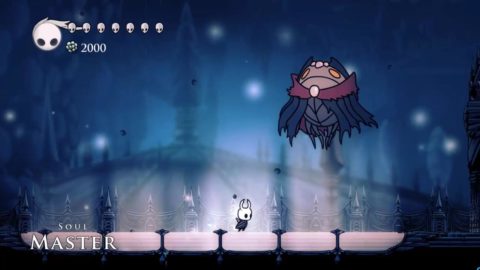 The Soul Master also shoot fireballs and then has an attack where he spins fireballs around him while move from one side of the arena to the other. His final attack is a dash towards you along the ground.

What makes this boss fight more difficult is that the Soul Master is almost always flying. Dodge his attacks and get a hit or two in whenever you can. After the dash along the ground is a good time, as is when he moves across the screen with the spinning fireballs.

When the Soul Master has been defeated he’ll smash through the ice floor and you’ll both land in the arena below. The Soul Master will change form and repeatedly smash into the ground. You’ll need to dash quickly out of the way.

When the Soul Master stays still at one end of the arena he’ll spawn fireballs. Now’s a good time to hit him as quickly as you can. Eventually he’ll die and you’ll win the fight. He’ll leave behind the Desolate Dive ability that allows you to smash downwards and destroy some types of floors.

Head to the left for your Geo reward, as well as a Hallownest Seal. Along the way you’ll also find one final Grub.

You’ll have to come back to explore the eastern half of the City of Tears. For now there are still many places to explore including the Royal Waterways and the Queen’s Gardens. For now we’ll head off to the Crystal Peak for a new ability.