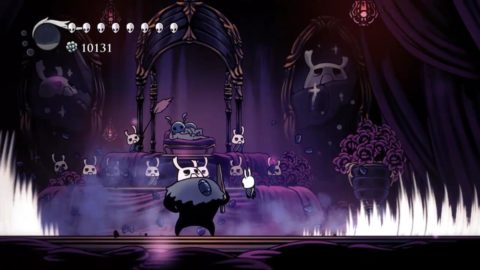 Grey Prince Zote can be found in Bretta’s basement back at Dirtmouth as long as you’ve rescued both Bretta and Zote and defeated Zote in the Colosseum of Fools. He can be fough up to 10 times but only gives 300 Essence the first time you defeat him.

Grey Prince Zote doesn’t seem to know what he’s doing and is constantly falling over. He’s still difficult to defeat as each time he falls over he’ll create a shockwave and he also likes to teleport around the arena before slamming into the ground.

Zote has 1200 health for the first battle. You’ll need to learn which moves create shockwaves so you can time your jumps over them. You can often get in a swipe or two after each shockwave. The Quick Slash and Fragile Strength charms work will for this fight. The Fragile charms won’t break if you lose a dream boss fight. 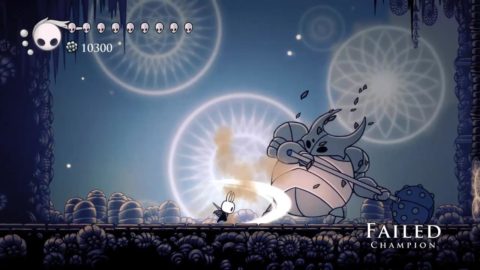 The Failed Champion is a buffed version of the False Knight. Each of his attacks will cause rocks to fall down from the roof but most of his attacks are very similar. When he jumps towards you this gives you a chance to dash underneath. You’ll be able to get in a few strikes before he turns around.

Standing in one of the corners may give you a chance to heal, especially if you have the Quick Focus charm equipped. The Failed Champion will get knocked over a few times, giving you a chance to heal or hit his head for more soul. Eventually he’ll be defeated and go crashing through the floor. Once he’s defeated you’ll receive 300 Essence. 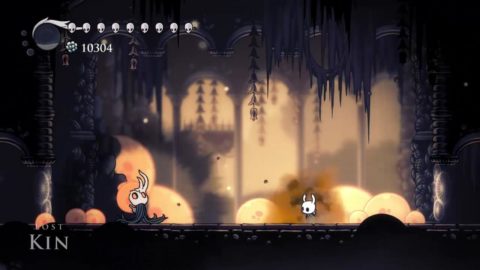 The Lost Kin can be found in the same place as the Broken Vessel in the Ancient Basin. He has 1200 health and slightly more difficult attacks. During the fight blobs of infection will spawn and chase after you.

The strategy for defeating the Lost Kin is basically the same as the Broken Vessel. stay on the ground because the Lost Kin likes to jump. Use Quick Slash to get in many hits at a time and Desolate Dive to really do some damage quickly. Killing the blobs that spawn give you soul so you should have no problem using spells during this fight.

A few times throughout the fight the Lost Kin will get knocked over for a short while, giving you a chance to heal, but you’ll still need to keep an eye on any infected blobs heading your way. Once the Lost Kin has been defeated you’ll be rewarded with 400 Essence. 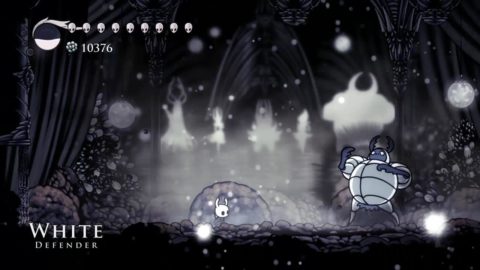 The White Defender has a lot of health, 1600 HP to be exact. He can be found by using the Desolate Dive just under the room to the right of the Dung Defender, where the lever is located.

The White Defender has many of the same attacks as the Dung Defender but he’s fairly easy to predict and most of the attacks can be avoided. Use Quick Slash to hit him repeatedly while he tosses the dung. Follow him around and get in swipes as he performs the dung eruption. If you’re close to him the dung won’t hit you.

Once the White Defender has been defeated you’ll be rewarded with 300 Essence. 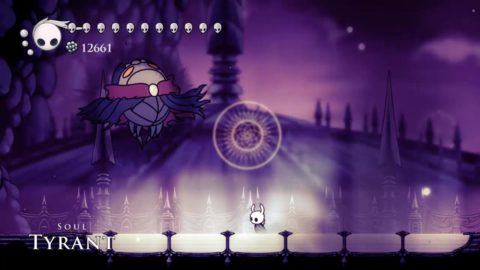 The Soul Tyrant’s attacks are the same as the Soul Master except he’s a little bit quicker and has more fireballs during his spinning fireball attack. Having the Monarch Wings will make it easier to avoid the shockwave from the ground pound attack.

The Soul Tyrant will teleport around the arena making him difficult to catch up to. You may only get in one or two attacks at a time so the Quicky Slash charm is not very effective for this battle.

During phase 2 the Soul Tyrant will smash through the floor and land in the arena below. He performs teleporting slams repeatedly until he eventually floats stationary on one side of the room. This is your chance to kill him. Avoid the fireballs and hit him with the Abyss Shriek or the Nail. Once he’s defeated you’ll be rewarded with 300 Essence.