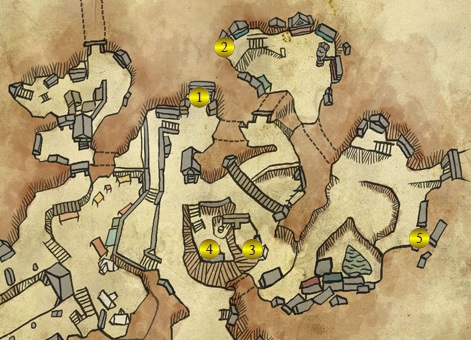 Aside from collecting artifacts from the war Philippa will need enough power to lift the curse. This quest is initiated after The War Council (#1) is concluded. Speak with Philippa (#2) to learn that power can be contained in magic crystals. You’ll need to talk to some of the townsfolk to find out where you can find them.

There are three dwarves you can talk to, the first is Skalen Burdon. He can be found in Skalen’s House (#3) or in the Tavern (#4). He suggests looking near the quarry or finding abandoned ruins. The Innkeeper (#4) doesn’t have much to say but points you in the direction of Cecil.

Cecil Burdon (#5) has a little more to say and mentions a ruined tower in the Pontar Valley. 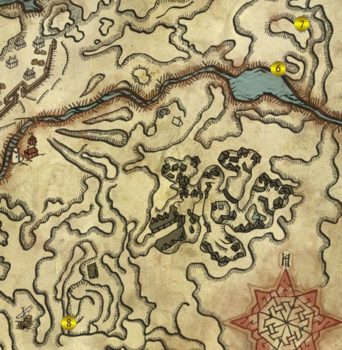 Follow the path from #6 and continue along the winding track. You’ll need to make a couple of jumps as you go. Eventually you’ll end up at the Ruined Tower (#7). You’ll face a few Harpies along the way, including the much more powerful Celaeno Harpy. In one of the nests you’ll find a Magic Crystal in the nest. Take it back to Philippa who’ll say that she needs more powerful crystals.

Before you head to the quarry make sure you have at least seven Harpy Traps. You’ll need them if you want to complete The Harpy Contract along the way. Once you reach the Lair (#8) head inside. 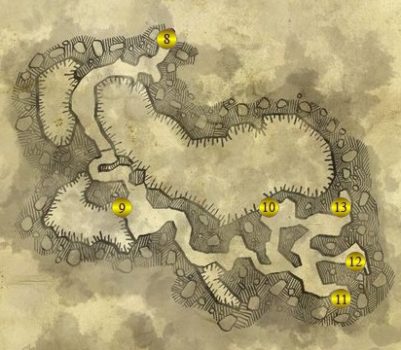 There are a few Magic Crystals inside the lair but you need to find one that’s potent enough to be used for the ritual. Each one contains a different dream. The first one is located at #9 (Iorveth’s Dream). You can view each of the dreams by using the Projection Ring (#10). When you reach the projection ring you’ll see a Harpy with a Crystal and have a vision of Letho’s dream. He’s been working with Sile.

After you’ve watched the dream you’ll be attacked by Harpies, including the Harpy Queen. This is a part of The Queen Harpy Contract.

There are a few other dreams scattered about the place. You’ll find Baltimore’s Dream at #11 which begins the Baltimore’s Nightmare quest, a Peasant’s Dream at #12 about a fantasy with Saskia and finally a Dragon’s Dream at #13. This crystal is powerful enough to be used to lift the curse. Once you view the Dragon’s Dream through the Projection Ring this quest will be complete.