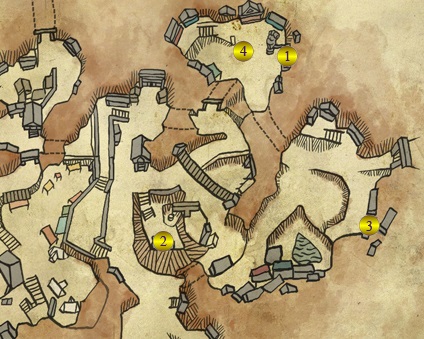 Like in most towns the dwarves enjoy a game of dice poker every now and again. Some even claim to be professionals. Before you can play the more renowned champions you’ll need to beat the less well known players.

There are quite a few dice poker players in Vergen but only the ones listed on the map above will count towards completing this quest. Start by entering the House (#1) where you’ll find Cornelius Meyer and Bruno Briggs. After you defeat both of them they’ll tell you to go and play the Innkeeper.

Head to  the Tavern where you’ll find the Innkeeper (#2) and challenge him to a game. When you win he’ll refer you on to Cecil Burdon (#3) but you can only play him after completing the quest Subterranean Life.

Once you defeat Cecil you can play the local champion Haggard (#4). Once you defeat him this quest will be complete. You can take Orens as your reward or chose from either Red, Yellow or Blue Meteorite Ore.