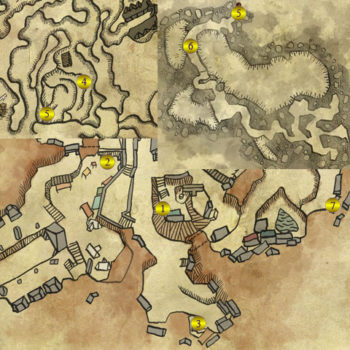 On the notice board outside the Tavern (1) you’ll find a quest to kill the harpies around Vergen and destroy their nests. You’ll need knowledge of harpies before you begin to speak to one of the merchants, Felicia Cori (2), for a book on Harpies. The nests will need to be destroyed with Harpy Traps so speak with Earso (3) to purchase the traps. You’ll need at least 7 Harpy Traps.

Make your way out of the city and towards the Quarry (4). The harpies will attack but instead of killing them place down a Harpy Trap. A harpy will pick it up and drop it onto one of the nests. It will explode, destroying the nest.

It doesn’t matter where you place the trap down as the harpy that picks it up will take it to a nest that hasn’t yet been destroyed. There are four harpy nests in this quarry. Once they’ve been destroyed you’ll need to get access to the Harpy Lair (5). The key for the lair is found during the Hunting Magic quest.

Inside the lair are 3 more nests. The nests are found on top of the ravines (6). Drop a Harpy Trap nearby and wait for a Harpy to pick it up and blow up its own nest. Once you’ve destroyed all of the nests you’ll gain the Birdman ability which increases damage to harpies by 10%.

With that job done make your way back to Cecil Burdon (7) for your reward of 200 Orens and a Fire Rune.