This mission is composed of two parts. The first part is getting access to the Soviet Command Center. Once inside you’ll need to deactivate the four atomic weapons. You’ll need to build your base from scratch so deploy the construction yard and start building a power plant, ore refinery and the war factory. There’s few gems to the east and ore to the north.

You’ll be attacked from the north and east with Soviet tanks and infantry so prepare defences or keep your own units on the outskirts of your base. The Soviet base has a construction yard in the north west corner. This makes it vulnerable to attack by your Longbows. One way to beat this mission is to build 6 or 7 Longbows and use them to snipe out the construction yard. Once the construction yard is destroyed you’ll have 60 minutes before the nukes are launched.

You can then use them to take out any of his other buildings to weaken the Soviet forces. Make sure you have around 20 medium tanks before sweeping through the base. You don’t need to destroy all Soviet buildings. Just bring an Engineer to the command center and take it over to complete the mission. Make sure you have at least 20 minutes remaining on the timer or you won’t be able to complete the next part in time. 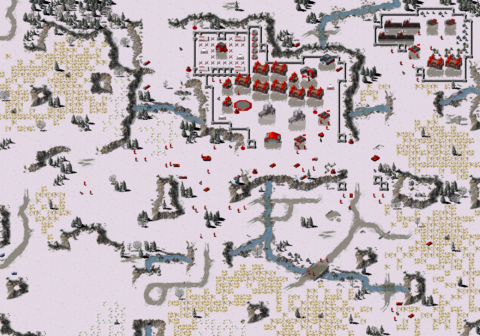 You’ll have the same amount of time left over from the last mission so the quicker you complete that part the more time you’ll have in this mission. The objective is to locate the control centers and deactivate the nukes. Hold your men still for a few seconds to kill the Soviets as they come running past.

Wait for the attack dogs to get killed and then send out your troops. Bring a Spy all the way to the room to the south and wait for Tanya to arrive. She should be able to pick off most enemy troops before they get close. The four control panels are locate in the south west, north west, north east and east.

Carefully make your way to the other control panels and use the engineers to deactivate them. Watch out for dogs as they will kill Tanya or your engineers with a single bite. Once all four nukes have been deactivated the mission will be complete. See below for a map of this area. 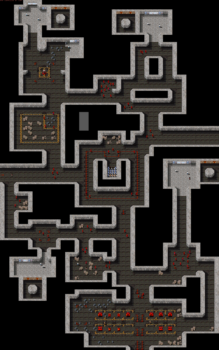 Next: Secure the River