Nod 13: Cradle of my Temple

Mission 13A: Cradle of My Temple 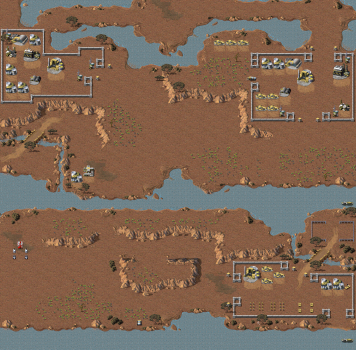 Your objective here is to destroy the three GDI bases. There’s one on the south island and two to the north. You have the option of building the Temple of Nod which allows you to fire one Nuke.

Deploy your MCV where it starts and build a Power Plant and Refinery. You start on a small bit of land between two rivers. Gunboats patrol the rivers to the north and then south. There is a small GDI outpost to the east.

Don’t bother with a Hand of Nod, just go straight into the Airfield. Build 3 or 4 Nod Buggies and a few Tanks. Send them over to the east to destroy the GDI Units. They have no production buildings on this strip of land so don’t worry about them producing more units.

The outpost to the east is easy to take over. Destroy the Guard Towers and then send an Engineer into the Refinery and other buildings. Be careful of the GDI infantry standing around on the southern side of this outpost.

Once you have all the buildings send two Engineers out through the northern entrance to take the two helicopters. You’ll be given a flare signal of where they can land on the other side of the river.

Send a chopper with Infantry first to scout out the area. Across the bridge you’ll find a Hospital and Power Plant. Take them both over and build a Refinery. Make sure your Harvester doesn’t harvest too far to the north or it will be targeted by Advanced Guard Towers from the main GDI base.

Send a Chopper with a few Rocket Soldiers and Engineers to the south wall of the GDI base to the west. Shoot through the wall, take over the Power Station and build a Hand of Nod underneath it. From here you can take over the other GDI buildings, including their Barracks and Weapons Factory.

You should have plenty of credits by now to build a large force of Medium Tanks. Use them to scout out a little to the east. Send in a Chopper with a Engineers and Infantry to the hill on the east. Take over one of the Silos and build a Hand of Nod unerneath. Take over the other Silos for more credits.

Either break through the wall of this base on the north side and take over the other buildings or send your Medium Tanks through the front door to wipe out the final GDI base. Once all GDI units and structures have been destroyed the mission will be complete.

Mission 13B: Cradle of My Temple 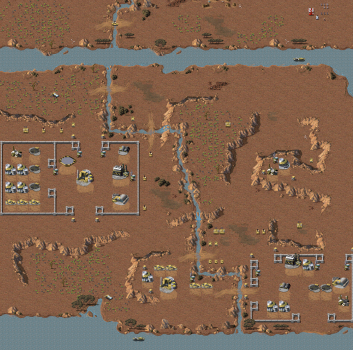 This mission is very difficult. Send your Tank and Rocket Troopers to the west and take out the Medium Tank. Send you MCV to the west, between the two small tiberium fields and build the Construction Yard. Establish a base here and send out your Infantry to clear the GDI soldiers to the west. Bring your Engineer to the west to take over the Chopper.

GDI will use Helicopters to drop off Grenadiers and other Infantry onto your strip of land. Make sure you have troops standing around to take them out.

Buid a second and then a third Refinery to gather up all the Tiberium as quickly as possible. Within a few minutes you’ll get some reinforcements on the southern side of the river. You’ll need to build your Construction Yard and at least 2 or 3 Cannons and an Obelisk to protect this base.

Once the southern base seems secure build a Refinery or two to harvest the Tiberium to the west. Use one of your vehicles to scout out the map. Send a Chopper with Engineers and Rocket Troopers to the south side of the western base. Break through the wall and take over the Silos. Build a Hand of Nod here so you can continue selling and taking over the Silos for more credits.

Now that you have access to the GDI silos build up an army of Flame Tanks and Small Tanks. Send them south to wipe out the southern GDI base and then west to take out that base as well. It helps if you have a Nuke ready to take out one of the Construction Yards while your tanks take out the other one.

Once all GDI buildings and units have been destroyed this mission will be complete.

Mission 13C: Cradle of My Temple 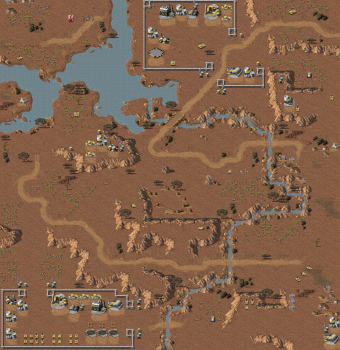 The beginning area is enclosed by water so just build the basics. You won’t need an Airfield until you deploy an MCV on the southern land mass. You will be carpet bombed repeatedly so keep your units spread apart and make sure your buildings are at full health.

Use the Commando, when he arrives, to destroy the church on the small island to the south of your base for a money crate. Then ferry him up to your main base with the Chopper.

Build a Communications Center on the eastern side of this starting area and you’ll get vision on the first GDI base. Send in an Engineer, Rocket Troopers and your Commando to break through the wall and take over the Power Station. Have an Obelisk ready to place down so you can quickly take out the Mammoth Tanks.

Establish your base here and use the Obelisks to break through the defences on the eastern side. There’s a Tiberium field to the east but you’ll need to lure out the Mammoth Tank before you can harvest it.

At some point you’ll be given another MCV on the western side of the map. Place it down just north of the pass through the cliffs and build Obelisks and Cannons on the southern side. Most GDI forces will be going through this pass.

Hold off the GDI at this point while you build an army of Mammoth Tanks. Send them around to the eastern side of the southern GDI base and wipe them out. Once all GDI units and buildings have been destroyed this mission will be complete.

Back: Mission 12: Steal the Codes