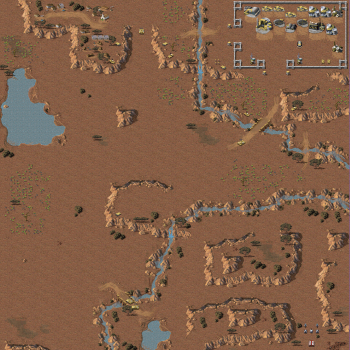 GDI are testing a new orbital Ion Cannon. Your mission is to infiltrate the GDI base and capture the Advanced Communications Center. You don’t need to destroy all GDI forces, just capture the center.

You begin with 5 vehicles plus an MCV. Move the vehicles north and then west until you come across the 2 Mammoths guarding the crossing. Use the MCV to get the Mammoths attention then draw it away. The other vehicles should be able to destroy the Mammoths without being targeted.

The GDI base is in the north eastern side of the map and there are two entrances, from the west and the south. There will be a lot of GDI vehicles, including Mammoth Tanks patrolling this area. Kite them back to the Obelisk near your base to deal with them quickly.

The Construction Yard is on the western side and looks like a juicy target. If you destroy the Guard Towers and the cement wall you can easily get an Engineer in take take over the Construction Yard. Sell it for cash and then work at taking over or destroying the other buildings.