You’ll need to move quickly for this mission because you only have 30 minutes to destroy all Protoss structures (25 minutes if you want to unlock the bonus mission). Grab 3 Drones and set them to harvesting gas, the rest can gather minerals. Produce more Drones from the two Hatcheries and set them to work gathering minerals.

You don’t need to worry about defending your base for this mission as it comes with Sunken Colonies already in place. You also have a small force of various units. You’ll want to take over the small Terran base to the south for the gas and minerals.

Start mutating Mutalisks and turn them into Guardians. While you’re waiting  you can send out the 2 Guardians that you started with to destroy the 3 Crystals and Protoss Cannons on the hill where the Matriarch is being kept. This will give you a head start in destroying the base later and the Protoss won’t mount a defence if you don’t go past the hill.

To destroy the souther Terran base about 6 Guardians should be enough but you may want to bring some of the other units that you started with like the Ultralisk and Hydralisks to help out.

Once you have destroyed the southern Terran base bring in 3 Drones to gather gas and a few more for harvesting the minerals. Leave some units stationed there until you can get 2 or 3 Sunken Colonies built to defend this base.

You’ll want a full group of 12 Guardians, 5 or 6 Devourers and a few Overlords for this attack. Start from the southern edge of the Protoss base and hold your units there while you pick off the Protoss forces.  Watch out for the High Templars as their Psionic Storm can almost wipe out an entire group of Guardians. When you spot the Carrier send in the Devourers to quickly take it down.

Continue moving slowly to the north as you sweep through the Protoss base. With a bit of luck and trial and error you should be able to wipe out the entire base with a little over 5 minutes to spare. 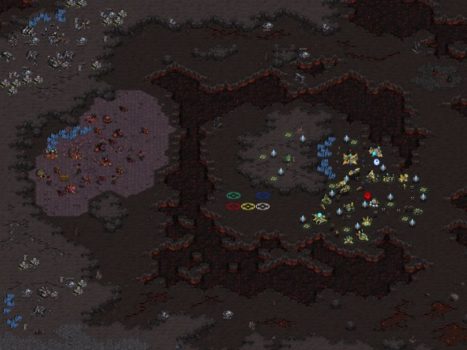